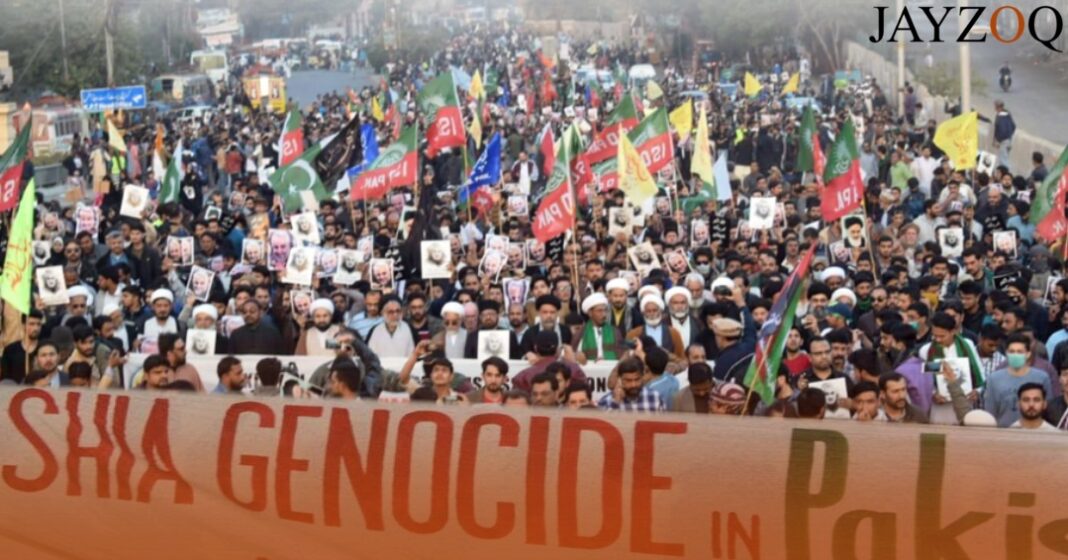 The Shia-Sunni sectarian divide is not something new, especially in Pakistan. This decades old conflict rising mainly in the 1980s has recently resulted in protests and unwarranted violence all over the country. Followers of the Sunni school of thought believe that Shias blame certain Islamic figures for events leading up to the Karbala tragedy whereas the same people are revered by Sunni Muslims for being the closest companions of Prophet Muhammad (pbuh).
During the recent Ashura processions in Pakistan, which commemorate the events at Karbala that happened nearly fourteen centuries ago, some remarks were made by the Shias against historical Islamic figures. The nature of these remarks did not sit well with hardcore Sunnis and the fact that these processions were televised nationwide only added fuel to the fire. These clerics then proceeded to organize a protest in Karachi, the country’s financial capital. The number of demonstrators in the protest were roughly around 30,000.

One of the leaders of the demonstration was Muneeb-ur-Rehman, chairman of the Ruet-e-Hilal Committee involved with the sighting of the moon; he claimed that the procession was to uphold the sanctity of Islam and did not target any specific group but chants declaring Shia’s as infidels echoed throughout the procession and told another story. He also wanted the different sects to be declared in the next census. His threats that the participants would resort to violence if their demands were not fulfilled, also raised a lot of concern among lawmakers.

Abid Mubara, the Karachi chief of the Tehrik-e-Labbaik Pakistan (TLP) was more bold about his threats, declaring that the Sunnis have the right to behead people who spoke ill about the Prophet Muhammad (pbuh). The TLP is to blame for weaponizing the love for the Prophet Muhammad (pbuh). By capitalizing on that devotion of the common Sunni Muslims, he can also now target all the other sects in Islam.
The Sunni Islamists made sure not to mention Shias in their addresses to the demonstrators but the banners of Sipah-e-Sahaba, an organization whose aim was to wipe out the Shias, conveyed the intentions of the leaders.
Some would argue that the reason for a rapid increase in violence against Shias stemmed from the most recent bill passed by the government. The bill, titled as Tahaffuz-e-Bunyad-e-Islam (Protection of Foundation of Islam), stated that the Sunni interpretation of Islam was the only valid version and would apply to all Pakistanis. The clauses which stated that all residents of Pakistan would pay respect to historic Islamic personalities sparked outrage in the Shia community. It was revealed that the Punjab Assembly members did not go through the bill properly before voting in favor of it.

Cue the bill, 43 blasphemy cases were reported against Shias. These cases coincided with the month of Muharram in which, as mentioned above, the Shias mourned the death of the grandson of the Prophet Muhammad (pbuh). One of these cases was also filed against a 3 year old. Taimur Rahman, a professor of political science at the Lahore University of Management Sciences, requested the public not to support anti-Shia rallies.

“We are deeply saddened. We have seen in the 80s and 90s that a nation is destroyed whenever sectarianism strengthens. It doesn’t serve Islam, Pakistan or the public,” he said.

The flames of the sectarian divide were probably fanned by social media, television and in some cases, the government’s blatant incompetence. It is of intrinsic importance to mention that the government has made no ground breaking efforts to combat the protests.
The recent events have been condemned by all human rights associations, some of which signed the petition which warned that blasphemy laws should not be used to commit genocide and settle personal agreements.

This sectarian divide not only makes us weak as a nation but also opens us up to external interventions. It is safe to say that nothing of much importance will be gained by anybody if these protests continue. A state can either be religious or democratic. Pakistan’s constitution makes it a religious state but if necessary decisions are not made to avoid hurting the religious sentiments of a particular sect, the country will never be able to overcome internal conflict and move towards a brighter future. The PTI government needs to deliver where the recent establishments, democratic or military, have failed entirely.