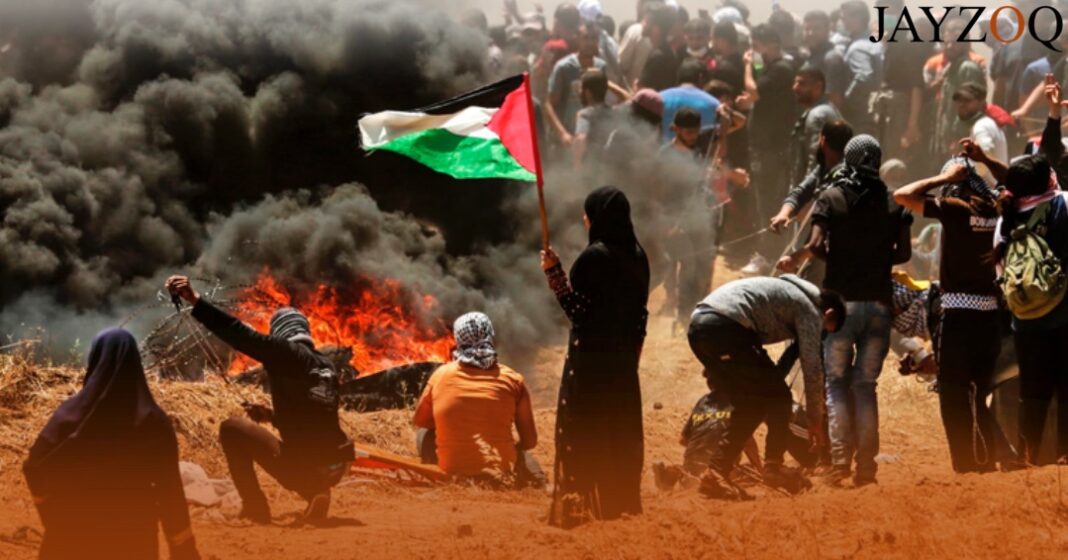 *Disclaimer: This is an opinion based article. Views expressed by the writer in this article are their own.

“The soldier would be buried the way he wanted to, a faceless man in a nameless grave. The younger men who would take his place would be harder, narrower, and less forgiving. They would be more likely to win any war they fought because they belonged to a generation that had known nothing but war.” (Excerpt taken from ‘A Ministry of Utmost Happiness’ by Arundhati Roy)

It is time we talked about the land of Palestine. The story started from the 1800s when the world knew peace in the right meaning. Ruled by the Ottoman Empire, Palestine was a place where Muslims, Christians, and Jews co-existed peacefully and would have existed in the future, too, if the world hadn’t been so cruel. When World War 1 ended, Palestine’s control came under British rule at the same time when a Zionist movement for the establishment of an independent Jewish state started in Europe. The Zionists saw this state in the form of Palestine. From the 1920s to 40s, thousands of Holocaust survivor Jews came to Palestine, supported by the British government, seeking a new home. This was the beginning of the tensions between Jews and the Arabs of Palestine. The latter instigated resistance against the occupation of their lands. Violence between the Arabs and Jews grew over time, and neither Britain nor the UN could resolve the issue. The British left Palestine amid the violence, the Zionist leaders saw their chance, and in 1948, they declared occupied Palestine an independent state of Isr*el. Naturally, this declaration was met by strong opposition from the Palestinian people and the neighboring Muslim countries. As a result, the first Arab-Isr*eli war started and ended when Isr*el won. The war divided Palestine into three parts, with over 78% of historical Palestine under Isr*el’s unjust occupation. In the years that followed the war, Isr*el expanded into apartheid, and thousands of Palestinians were ruthlessly killed with about 750,000 forced to flee from their homes. They were never allowed to return or see their homeland again. This tragedy of the human world is known as Al-Nakba or The Catastrophe.

For the Palestinians, Al-Nakba never ended. The violence never ceased. Illegal occupation of their lands never stopped. For them, every day they live is Al-Nakba.

A family in 1948, leaving a village in Palestine five months after the creation of Isr*el. Picture by Al Jazeera

In 1967, another war broke out between Isr*el and neighboring Arab countries. When it stopped after six days, the whole of Palestine, including the West Bank and the Gaza strip, was under Isr*el’s illegal control. As a result, more Jewish settlers arrived in Palestine, giving rise to frustration and anger in the Palestinian people. For the years to follow, thousands of Palestinians were brutally killed by Isr*eli forces when they stood up against the latter’s illegal occupation of the Palestinian land. The two intifadas (uprisings) by the Palestinians in these years resulted in Hamas, a political movement supporting Palestinians, being born. Hamas’s primary purpose was and still is to fight against Isr*el’s occupation of the West Bank and the Gaza strip. In 1993, the Oslo agreement was signed between the USA, Isr*el, and PLO (Palestinian Liberation Organization), splitting the West Bank into three sections. If Isr*el thought this splitting was a way to keep the Palestinians silent, they were wrong. As per the agreement, the area that came under the Isr*eli control had most of the agriculture area and the main water supply. The outrage from the Palestinians on this discriminatory treatment only resulted in more deaths and violence. The Isr*elis increased their aggression by setting up checkpoints to monitor Palestinians and control movement in and out of the country. The Gaza strip was put under blockade, and the people living there were stripped of fundamental human rights. Once so beautiful and peaceful, the land of Palestine became an open-air prison for its own people, and the cruelty never stopped.

It is 2021, and Palestine continues to survive at a bare minimum under Isr*el’s suffocating, illegal rule coupled with frequent violent attacks. From 2009 to 2019 alone, Isr*el unjustly killed 3688 Palestinians. The recent Isr*eli assaults on the Palestinians that started on May 10th have caused outrage and frustration in masses of people worldwide. For every Muslim, or just for any human with feelings, the current situation in Palestine is nothing less of inhumane genocide and barbarism. In the 11 days of extreme violence from Isr*el’s end, about 248 Palestinians were killed in the Gaza strip, including sixty-six children, while thousands were injured. The attacks started from Sheikh Jarrah, a neighborhood in East Jerusalem where Isr*el had issued illegal eviction notices to Palestinian families early this year. When the time came, Isr*eli police started forcing the six Palestinian families out of their homes to make way for more Isr*eli settlers.

Consequently, this was met by protests and resistance from the Palestinian people as the latter found Isr*eli behavior an attempt to steal their land. By no law was the police legible to force people out of their own homes for the sake of some extremist Isr*eli settlers. But since Isr*el has neither got accountability nor fear for their actions, they always resort to violence to control Palestinians. Hence, the police used force to disperse the protestors, and when people persisted, Isr*el used other ways to threaten them.

By now you would be thinking why don’t Palestinians give up. Given the fact that they are deprived of their rights, and are vehemently killed and injured every so often, it would be very easy for them to flee from their land and seek a safer place. But here our topic turns towards the Al-Aqsa Mosque. The Old City in Palestine is home to the Al-Aqsa mosque, Islam’s third holiest site. Al-Aqsa holds extreme importance and respect in every Muslim’s heart. Attacking it is akin to attacking the very existence of Islam itself. The people of Palestine are the protectors of Al-Aqsa. They wake up every day fighting for its honor and safety and keeping in their hearts the hope of a free homeland. But at the same time, Al-Aqsa is the tiny fragment that unites Isr*el and Palestinians. Many believe that Isr* el’s ultimate goal is to build a Greater Isr*el by emptying the Palestinian land of the Palestinian people and gaining full control of Al-Aqsa because the latter is as holy to the Jews as it is to Muslims.

So, when protests persisted in Sheikh Jarrah, Isr*el brutally attacked Al-Aqsa by storming in the compound where Palestinians were praying and threw stun grenades, smoke bombs, and rubberized steel bullets at them. This happened in the Holy month of Ramadan, and Isr*el didn’t stop there; no, they continued attacking Palestinians at Al-Aqsa twice as hard as the first time, turning the place into a war zone.  The injustice of it all is that when Palestine’s only defense force Hamas fired back rockets at Isr*el, the latter started the rant that they were acting in self-defense. As if they weren’t the ones who injured more than 600 Palestinians, including women and children at Al-Aqsa, arrested and killed peaceful protestors at Sheikh Jarrah in the persuasion of their inhumane ethnic cleansing, turned down Hamas’s peaceful request to stop attacks on Al-Aqsa. No, not at all; Isr*el was only acting to protect its people from the violent Palestinians. Let me remind you all that Palestine has got no army, navy, air force, military budget, or so much as fundamental human rights. Yet, they stand tall and resist against the world’s most influential and brutal army, and never in the 70 years of Isr*eli occupation of their lands have the Palestinians given up. At this point, there is no confusion as to who the oppressors are and who the oppressed are.

Palestinians carrying the bodies of children killed in an Isr*eli attack in Gaza. Photo by the New York Times

So, after Hamas fired back rockets, Isr*eli forces took to Gaza and bombed it hard. Within days, they wrecked immense havoc by destroying apartments, buildings, hospitals, and mosques, killing hundreds of Palestinians and injuring hundreds more. They further threatened to invade Ghaza by ground as if they hadn’t caused enough damage yet. If we compared the power dynamic of Palestine and Isr*el, we would find an insane imbalance of power which leaves people in no doubt about the terrorists Isr*elis are. Yet, still, some people have the stupidity to call the whole thing a ‘conflict’ between Isr*el and Palestine. Let me point out that we are talking about oppressors versus oppressed, high-tech weapons, robust military systems, and Iron Dome, all funded by the US versus rocks. Literally rocks. The only weapon the Palestinians have. The irony is that these rocks are older than the so-called illegal state of terrorist Isr*el.

Nothing the world says at this point will justify the genocide Isr*el caused, the innocent people they massacred, the havoc they wreaked. No newspaper, textbook, or government system in the world can rationalize why more than 30 children were buried in Gaza on Eid. No justice system can explain why even after all the violence, Palestinians were the ones getting arrested and beaten up. No media house can validate why censorship was imposed on people worldwide who spoke out against Isr*el, and their remarks against the terrorism Isr*el caused were labelled as anti-Semitic. No power in the world can vindicate why innocent villagers with stones are thought to be oppressing a nuclear superpower.

This one article doesn’t do apt justice to all the barbaric terrorism Isr*el has done on Palestinians. But then again, the stories may never end, and the cruelty may never stop. Nevertheless, we live in the hope of a free Palestine because we all know too well that our freedom is incomplete without the freedom of the Palestinians.