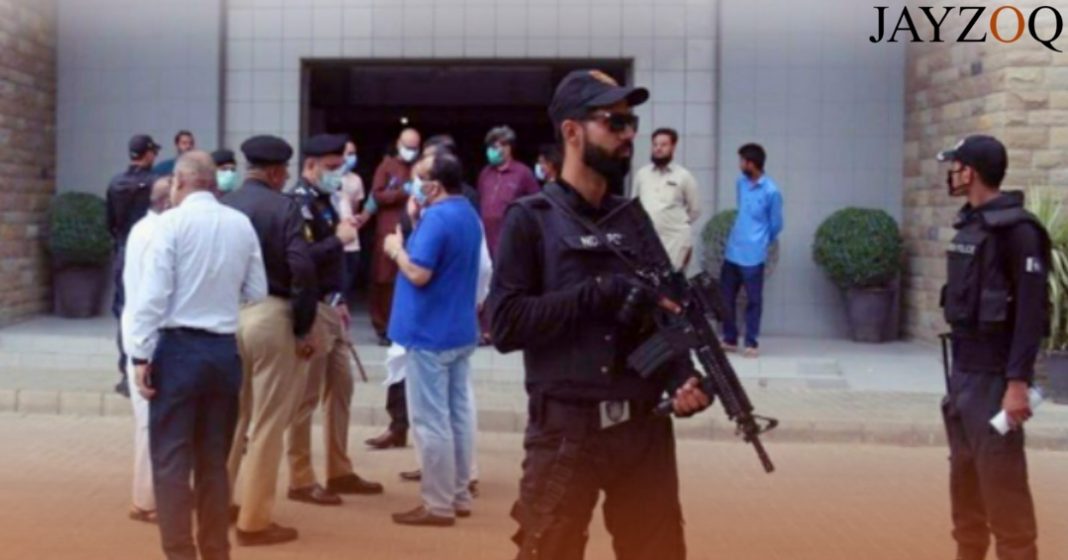 Karachi: The month ended on a rough note when headlines started circulating of an attack on the Pakistan Stock Exchange, Karachi, which resulted in several casualties.

On Monday, 29th of June 2020, a group of four armed men stormed into the Pakistan Stock Exchange (PSX) in Karachi, Pakistan, at around 10 am PST, and tried to force their way in.

‘The facility flooded with waves of hand grenades and the ears hearkened the sound of gunshots. The smell of imminent death of three security personnel: one police officer and two private security guards, soon made its way to local media, which rushed to the scene.

As per the Director-General of Sindh Rangers, major General Omar Bokhari, these gunmen were prepared for a long standoff and wanted to take hostages. They were not only equipped with arms and grenades, but were also loaded with food supplies, which is an indication of the said claim; however, it was within eight minutes of the crossfire that Sindh’s Rapid Response Force blocked their aims of a terrorist bloodbath, by taking down all four of the shooters.

The perpetrators have been identified as Tasleem Baloch, Shehzad Baloch, Salman Hammal, and Siraj Kungur. It was later determined that these gunmen were associated with the Majeed Fedayeen Brigade of the BLA. Majeed Brigade is an elite squad in the Balochistan Liberation Army and has been named after Abdul Majeed Baloch, a bodyguard of the former Pakistani Prime Minister, Zulfiqar Ali Bhutto. While on duty, Abdul Majeed Baloch attempted to assassinate Z.A Bhutto but was neutralized by his fellow guards. Majeed Fedayeen Brigade is a tribute to Abdul Majeed Baloch and this suicide squad is considered to be one of the most elite groups in the Balochistan Liberation Army; this faction of the separatist movement has not only been banned in Pakistan but in the UK and the USA as well.

Despite a brave response that foiled the plans of the separatists, there is still a question that leaves us all hanging; why? Why would an alleged terrorist organization attack on the Foreign Exchange Building?

The officials and representatives of the state have always blamed India for playing dirty and funding the secessionist movements in Balochistan since the 1970s. Even though India has always denied any involvement in the Balochistan province, the capture of Kalbushan Yadav, an Indian navy officer residing in Pakistan with a fake passport, has raised questions on India’s self-proclaimed innocence.

The same can safely be said about the BLA as well, who claims to be in a quest for ‘Greater Balochistan’ and wants separation from Pakistan; BLA has previously been involved in similar misadventures against the state as well, where they have repeatedly been involved in attacking the Chinese convoys destined for China Pakistan Economic Corridor (CPEC), which is majorly set for the Balochistan province.

However, there is still the vagueness smudging the importance of the target of the said attack. Major General Omar Bokhari further added in his briefing that this attack on Pakistan Stock Exchange holds a symbolic value because of China and India’s recent standoff. It was in 2016 that 40% of the shares in Pakistan’s Stock Exchange were bought by Chinese authorities, and the recent turn of events between India and China over the Ladakh region of Kashmir has made it more of a symbolic attack; this attack is a retaliation in response to not only the Chinese advancements in the Ladakh region of Kashmir, but has also tried to demonstrate that India can and will damage Chinese and Pakistani interests. India wants to scare Chinese and international investors off Pakistan by means of social instability.

However, things are never this simple. Pakistan Stock Exchange is in the commercial hub of the bustling metropolitan and the vicinity of the building, houses the State Bank of Pakistan, the Karachi Dry Port, FIA Headquarters, and several other commercial buildings. Even though all these buildings are of paramount importance in terms of security as well as the economy, there is a far more valuable and stronger target in the neighbourhood as well－ the Naval Headquarters.

Pakistan’s Naval Force has never been as strong as its on-ground counterpart, but things are certainly improving with the new equipment, including submarines, coming in from China and Turkey. It was only last week that the headquarters of the Balochistan Liberation Army in Afghanistan was attacked by unknown gunmen as well as a vehicle bearing explosive devices, which led to a handful of casualties. Hence, this attack could be a message that not only records a protest but also acts as a warning not to interfere with Indian interests.

All in all, this attack has surely been a means of deterrence by India for both Pakistan as well as China where India has not only demonstrated her power and influence in the internal affairs of Pakistan, but also, has put a cap on the rapid growth of the China Pakistan Economic Corridor.