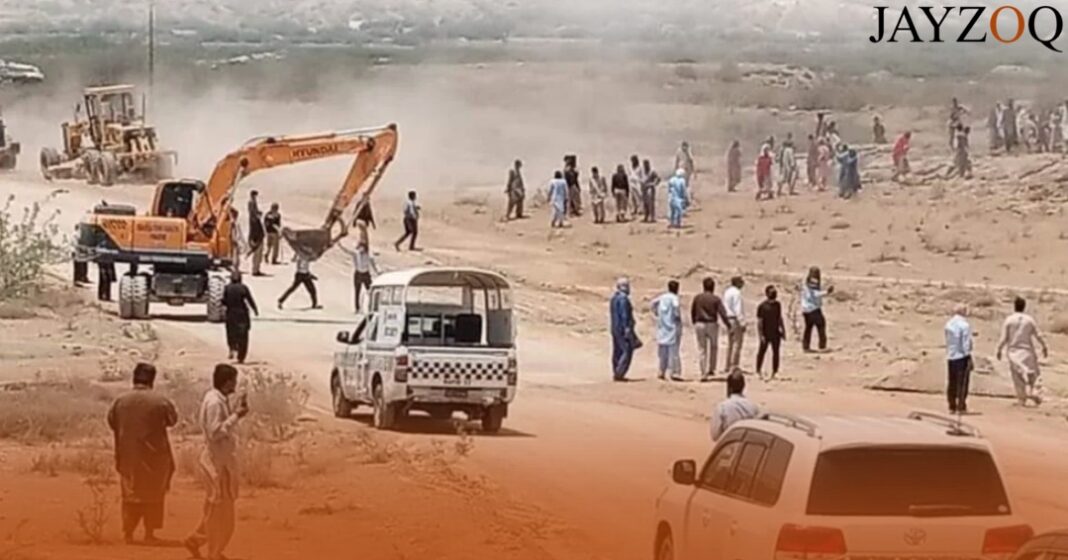 In the last few weeks, business tycoon and real estate billionaire, Malik Riaz has come under the spotlight due to Bahria Town’s encroachment of indigenous lands in the outskirts of Karachi. Bahria Town, a private real estate company founded by Malik Riaz has established a strong reputation as one of Pakistan’s biggest real estate companies. It has constructed lavish gated communities in Lahore and Islamabad to accommodate Pakistan’s elite. Meanwhile, its largest under-construction project, Bahria Town Karachi (BTK) officially spans around a staggering 46,000 acres. With such an enormous footprint Bahria Town Karachi is larger than Manhattan. However, the acquisition of these lands has been a subject of controversy as BTK has often indulged in illegal land grabbing by methods of intimidation and force.

Bahria Town Karachi has an extensive history of illegally encroaching on the lands of indigenous Sindhi and Baloch communities in Malir. In March 2016, BTK accompanied by the local police demolished the houses in the Juma Morio Goth village, for the construction of a road. “The job was quickly completed and the rubble hauled away while hapless villagers looked on in a daze, knowing full well there will be no justice for them,” – A resident describing the incident. Residents of Malir and its surrounding districts have also suffered continuous harassment and intimidation at the hands of BTK. Assisted by the police they have effectively strong-armed villagers into selling their lands. These blatant attempts of coercion range from local police abducting five villagers from their homes in 2015 to Bahria Town workers forcibly entering Haji Ali Mohammad Goth village in 2020.

Besides forcibly occupying lands and destroying homes, it has also desecrated the graveyard in Usman Allah Raki Goth and the shrine of Sufi mystic/Sindhi poet Shah Abdul Latif Bhittai. Moreover, the project is rapidly exploiting the natural resources of the area. In 2016,  Mohammad Saleem, President of the Voice of Indigenous Community Empowerment told Dawn that, “Bahria has sunk deep wells that are fast depleting the underground water, the only source of water in the area, for villages situated even miles away.”

The occupation of these lands raises serious questions about the legality of Bahria Town’s actions. According to the 1993 Malir Development Authority Act, the allotment of government land to private developers was forbidden. However, in 2013, Pakistan People’s Party (PPP) amended the law to give the MDA the direct authority to consolidate land. The amendment vested in the MDA the power to consolidate thousands of acres of private lands for commercial development. However, still, the amended Act only allowed MDA to consolidate land solely for its own schemes. Here, through disingenuous methods, MDA granted ownership of the consolidated lands to private owners and granted the executive director of Bahria Town “special power of attorney of the owners”. Thus, by doing so, the MDA, the local administration, and the BoR Sindh deceitfully distorted the law to consolidate thousands of acres of land for Bahria Town Karachi.

This extensive history of violating and manipulating the law is achieved by the virtue of Mr Riaz’s overwhelming economic power. Meanwhile, he seems to be perfectly aware of his overwhelming power and is not shy to utilize it, leaving political parties, local police, and the media at his behest. Therefore, it is not surprising that when BTK accompanied by state machinery descended on the Noor Muhammad Gabol Goth village the media turned a blind eye to the matter. Reportedly, on the direction of Bahria officials, the police also abducted and tortured a resisting resident. This incident received little to no coverage, however, generated a storm of outrage on social media. Activist Ammar Ali Jan, highlighted the lack of media coverage in the following words, “A lot of coverage being given to elections in #NA249 but almost no coverage of the violent eviction of thousands of native villagers to appease Malik Riaz. This is “democracy” of Bahria Town, by Bahria Town and for Bahria Town”. MNA, Mohsin Dawar also tweeted about how he was not allowed to speak about Malik Riaz in the National Assembly. Thus, due to the resentment on social media and the resistance put up by the villagers, Bilawal Bhutto took notice of the incident. He ordered a report by the Sindh Chief minister and meanwhile all evictions to be halted.

Despite Bilawal’s order, BTK resumed its encroachment, this time entering another village in Malir with bulldozers and heavy machinery. However, when the locals resisted Bahria Town guards open-fired, injuring 2 people. After the incident, Bahria Town security took the injured to the nearest police station to register an FIR against them. Citizens on social media expressed strong condemnation and anger against Bahria Town with the use of hashtags such as #SayNoToBahriaTown and #ArrestMalikRiaz. Yet again, the growing frustration and outrage of the people forced the state and its institutions to act. Consequently, cases were registered against Bahria guards on the charges of rioting and kidnapping. Meanwhile, the AC and SHO of Gadap were removed.

While Bahria Town’s encroachment is done under the pretext of development, it seems as merely a violent attempt by the rich to seize all of the nation’s resources to quench their insatiable greed. The entire fiasco has also laid bare the vile truth of capitalist society, that is, the rich and poor live in two different nations. The rich live in a nation where they can capture thousands of acres of indigenous land and the poor live in a nation where they can only helplessly stare at the sight of this injustice. These are the same “Two Nations” Lenin identified on the streets of London over a century ago, and like Lenin, we must side with one.