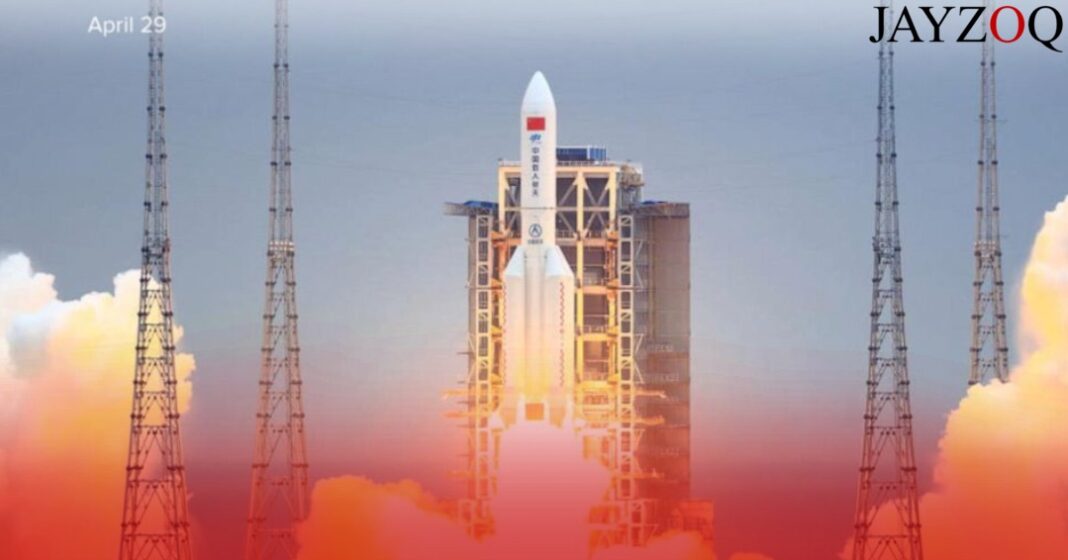 The debris of a Chinese rocket fell into the Indian Ocean on 9th May this week and the media is angered calling its unruly condition an “irresponsible act”.

The Long March 5B was launched on April 29 at the Wenchang Space Launch Center in China. Its mission was to carry into orbit a module containing living quarters for a future Chinese space station.

But after completing that task, the body of the rocket was circling Earth soon having to re-enter the lower atmosphere. The uncontrolled nature of its reentry had left experts concerned about the potential impact it could have when it landed. The large piece of space junk measured 98 feet long and 16.5 feet wide and it weighed 21 metric tons.

The federally-funded research firm The Aerospace Corporation posted a tweet late last Friday saying its prediction for landing was eight hours either side of 4:19 GMT time on Sunday morning. It pinpointed an area near the north island of New Zealand as a possible reentry point, but said it could happen anywhere across large parts of the planet.

Chinese Foreign Ministry Spokesperson Hua Chunying said at a press conference earlier that same day that it was “common practice” across the world for the upper stages of rockets to burn up while reentering the atmosphere.

“China is following closely the upper stage’s reentry into the atmosphere. To my knowledge, the upper stage of this rocket has been deactivated, which means that most of its parts will burn up upon reentry, making the likelihood of damage to aviation or ground facilities and activities extremely low,” he went on to say, according to a translation on the ministry’s website.

On Thursday, Secretary of Defense Lloyd Austin told reporters that the United States had no plans to shoot it down and was hopeful that it will land in a place where it won’t harm anyone.

“I think this speaks to the fact that for those of us who operate in the space domain, that there is a requirement — there should be a requirement to — to operate in a safe and — and thoughtful mode, and make sure that we take those kinds of things into — into consideration as we plan and conduct operations,” he said, overtly suggesting negligence on the Chinese front.

He was not the only one to express dismay over the incident but was also accompanied by Sen. Bill Nelson, Administrator NASA who released a statement saying, “Spacefaring nations must minimise the risks to people and property on Earth of re-entries of space objects and maximise transparency regarding those operations. It is clear that China is failing to meet responsible standards regarding their space debris.”

As the anger and discontentment from the long rivals rose, China also bit back with Hui commenting that as compared to debris from a rocket launched by U.S. aerospace company SpaceX that fell to Earth in Washington and on the Oregon coast in March, the reception of their error was unfair. “American media used romantic rhetoric like ‘shooting stars lighting up the night sky but when it comes to the Chinese side, it’s a completely different approach.”

An image found on the SpaceX website of the March debris falling on a man’s farm that they captioned as “a rocket debris putting on a light show.”

She further insinuated that China was ready to work with other states as well as USA in enforcing better space practices but regretted USA’s double standards.

As China plans to launch 10 more rockets for the construction of their space station, it is inevitable that USA will be watching them closely and might grab at anymore opportunities to humiliate the Asian state further.