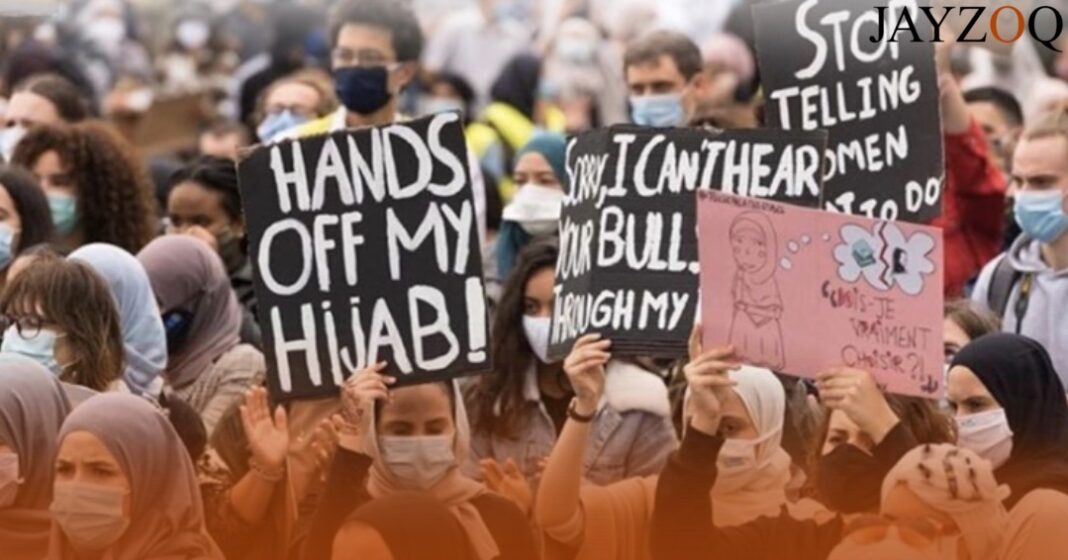 On 30th of March, the French Senate voted in favor of a legislation that, if passed, would ban Muslims from wearing a hijab in public.

The hijab is a headscarf worn by many Muslim women and has been the subject to debates all over the world.

The latest amendment to the “separatism bill” might also prohibit hijab-wearing mothers from going on school trips with their children and ban full-coverage swimsuits i.e. burkinis, in public pools. This is a violent attack on the Muslims living in France, and worldwide, as this might cause an increase in Islamophobia all around the world.

People all over the world have started speaking up about it and hashtags like #handsoffmyhijab were used to show discontent, but not enough people know about it or think it’s wrong, the way Islamic countries are criticized for making the hijab compulsory, France should too for prohibiting Muslim girls from wearing one.

Banning the hijab is a human rights violation and good against France’s national motto of “liberté, égalité, fraternité” i.e. freedom, equality, and fraternity.

France’s anti Islam law would make life very difficult for the Muslims living there. This bill has always been controversial and is seen as an attempt to legalise the already existing Islamophobic and  anti-Muslim feelings in the France.

What is really astonishing is that young girls are allowed to consent to sexual relations at the age of fifteen, but Muslim girls can’t choose whether they want to wear a hijab or not.

Wall art as a form of protest

In 2004 France also banned Muslim girls from wearing the hijab in schools, this was also deemed very controversial.

Hijab is a choice. Just as you may choose to wear any other item of clothing. But France has taken that choice away from women. France’s version of secularism really infringes on the freedom to practice one’s religion freely, especially Islam. France thinks it’s ‘liberating’ Muslim women, but it’s actually pushing them out of public life even more so than before.

Hijabi wearing the French flag as a hijab during a protest

French hijabis are being pushed out of public life, like education and politics is become almost impossible for them. France keeps making laws for them without taking their feelings and opinions into consideration. How is that democracy? Muslim women deserve to make that choice for themselves. Passing of this bill would make people all over the world think it’s okay to be Islamophobic, when it’s not. Hate is contagious and therefore it is extremely important to stop this hate before any major damage is done.