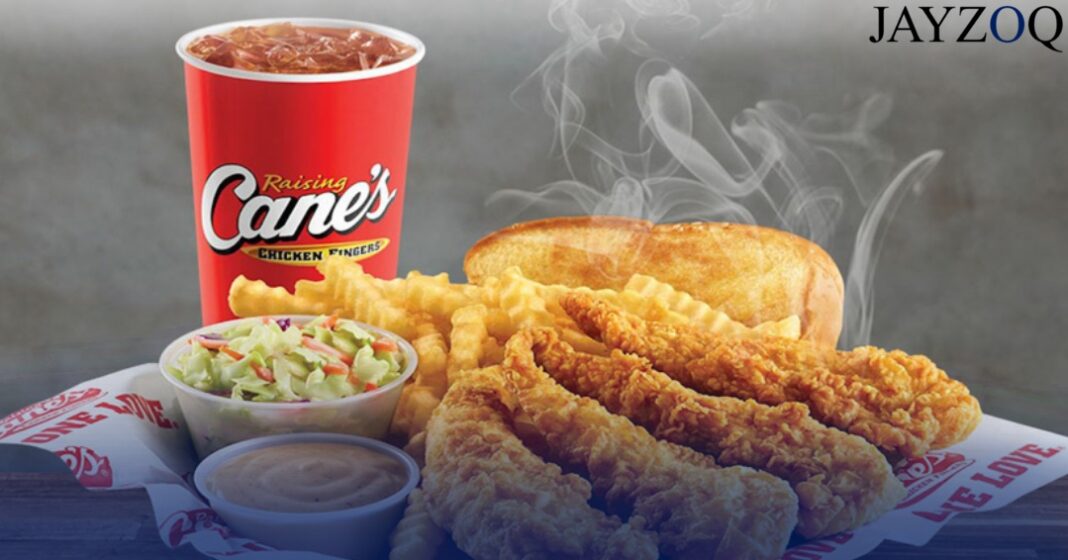 Apart from McDonald’s, KFC and Dominos, that are just some multiple American food chains that might pop up in your mind when you decide your meal for the night, one food chain that is increasingly growing is Raising Cane’s.

Raising Cane’s climbing popularity is apparent today. The company’s success is impressive considering how it only came into existence in 1996. Since most of its products are chicken affiliated, Cane’s has plenty of competitors- main ones being Popeyes and Chick-fil-A – and is nowhere near them in terms of statistics or pure size. However, the escalating popularity in recent times is expected to grow more rapidly.

Raising Cane’s has come a long way since it started in 1996. Considering how young they are compared to other businesses- who have racked up at least 40 years in the market and thousands of locations – their journey marks an impressive example. The company is on pace to be in that category. The story of Raising Cane’s is simple yet one that teaches you courage and the lesson to not give up on your goals.

It all started off when the founders, Todd Graves and Craig Silvey, had a business plan to open up a chicken fingers food chain. The plan seemed like a distant dream, especially considering that Graves and Silvery had the worst grades in a college business class for their plan, yet their willpower allowed them to prosper.

In spite of  being marked as a failure, Graves and Silvery started from nothing. The duo worked at multiple jobs in Alaska and California until they finally got a SBA loan that set them up on their way of opening up their first restaurant. The restaurant was the first of over 500. The expansion of the brand boomed at a furious pace and it soon headed into more and more states. The amount of states that have Raising Cane’s now stands at 28, and plans have already been confirmed for expansion to Utah. As well as Stateside, the fast-food chain has grown to have units in the Middle Easters countries:  Kuwait, Lebanon, United Arab Emirates, Saudi Arabia and Bahrain. From being the worst graded business plan in college to having a sizable presence in the American Midwest and South, Raising Cane’s has definitely come a long way. It has also brought with it a growing online presence because of its sublime menu and consistent posts.

Raising Cane’s is an interesting food chain to look at as it is neither too small to be considered another small chicken products company, nor is it a gigantic food chain with units across every corner of Earth. The company is just a simple case of a business starting out in a competitive market, with a plethora of substantial companies, and carving itself a permanent place. The company’s achievement is definitely worth noting, especially knowing that many businesses cannot pick up steam and ultimately don’t last for a sustainable amount of time; Raising Cane’s is an exception to many businesses that didn’t last past a decade, particularly in a competitive market. Through humbleness and constant movement, the chicken finger fast-food chain has found itself in a prominent position.

Whilst it is still far off from being at the top of its industry, for an entirely private food chain that only came into existence before the new century, the progress it has made despite its setbacks is admirable. Raising Cane’s journey shows how resilient belief can produce success.

Like a Phoenix from the Ashes: The Revival of the Chinese Economy

Starbucks: Their Monopoly in the Coffee World