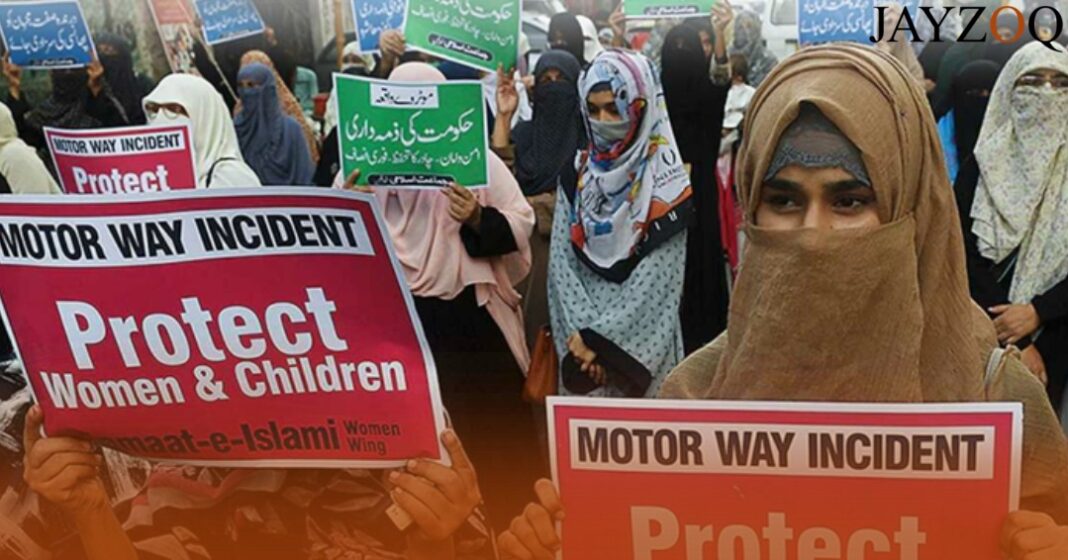 The night between the 9th and the 10th of September last week, a young woman who was on her way from Lahore to Gujranwala with her children, was attacked on the motorway. She was forced to stop near the Gujjarpura section of the motorway when the fuel in her car ran out at around 1:30 AM. Soon after stopping, she called a relative for help and also sent him her location. He asked her to dial the Motorway Police Helpline 130 which she did, but in vain. Reportedly, the officer on call told her that the area was not under his department’s  jurisdiction.

Two armed assailants attacked her vehicle, breaking the windows and taking her along with her children to a nearby field under gun-point where she was gang-raped in front of the children. They also snatched her purse carrying Rs100,000 in cash, one bracelet, the car registration papers, and three ATM cards. When the relative reached her location, he found the woman terrified and her clothes stained with blood.

The Lahore police chief, in his talk with Dunya News on the matter, seemingly put the blame of this incident on the victim which added fuel to the nation’s outrage. In his remarks to the news channel, the CCPO wondered why the woman took the route she chose to travel and said that she should have checked her petrol tank before getting on the said route.

“First, I am surprised that she, a mother of three children, was the only driver. She left Defence and should have taken GT Road, where there are shops and people nearby. If you are taking the other way, then at least make sure your vehicle has fuel,” he remarked.

He was immediately criticised and his remarks condemned by various activists and politicians while many also demanded that he be removed from his position, as a person with his mindset is not suited to be the head of the police department.

“[A] guard cannot tell the owner of the house to protect their belongings themselves”, he asserted.

Human Rights Minister Shireen Mazari criticised the Lahore CCPO for “blaming a woman” for being raped. “For an officer to effectively blame a woman for being gang-raped by saying she should have taken the GT Road or question as to why she went out in the night with her children is unacceptable,” said Mazari in a tweet. “Nothing can ever rationalise the crime of rape.”

The uproar also included many people speaking out about the system being ingrained with patriarchy and being inherently sexist where the chief of the police department thought it was okay to blame the victim about not having taken the route she chose when in fact, it is her right to take whatever road she wants and instead of questioning her actions, their duty is to protect her. It also adds to the fact that the women of the country are constantly told to protect themselves but nothing is ever done about the men involved in making rape jokes, cat calling or leering at women in public.

All this leads to, is the normalisation of rape and consequently adds to the rape culture that most people are not even aware of but actively contribute to. It starts with every single man who does not stop his friends from talking inappropriately about a woman. It starts with every brother who hears his sister being told to look down in a public area while she is being stared at and does nothing about it. It starts the second you start viewing women as objects of sexual pleasure. It starts with every one of you who does not actively contribute to help a woman around you when she is wronged by society. It is very important that men realize the inherent advantage they have, even in today’s society, and use that to promote equality between the sexes. Working towards a more egalitarian society will definitely help make the world a better place for women who have to face oppression at every stage of their lives.

I cannot thank you enough for the article.

Jayzoq is a student-run media outlet that strives to bring to people, free and ethical journalism by analysing the world's greatest issues and providing pinpoint opinion articles. All our members are from the youth community, and most of them are still students, which serves to show that the youth has an important role in shaping the future world.
Contact us: info@jayzoq.com
© 2021 Jayzoq Media. All Rights Reserved.
wpDiscuz
1
0
Would love your thoughts, please comment.x
()
x
| Reply
MORE STORIES