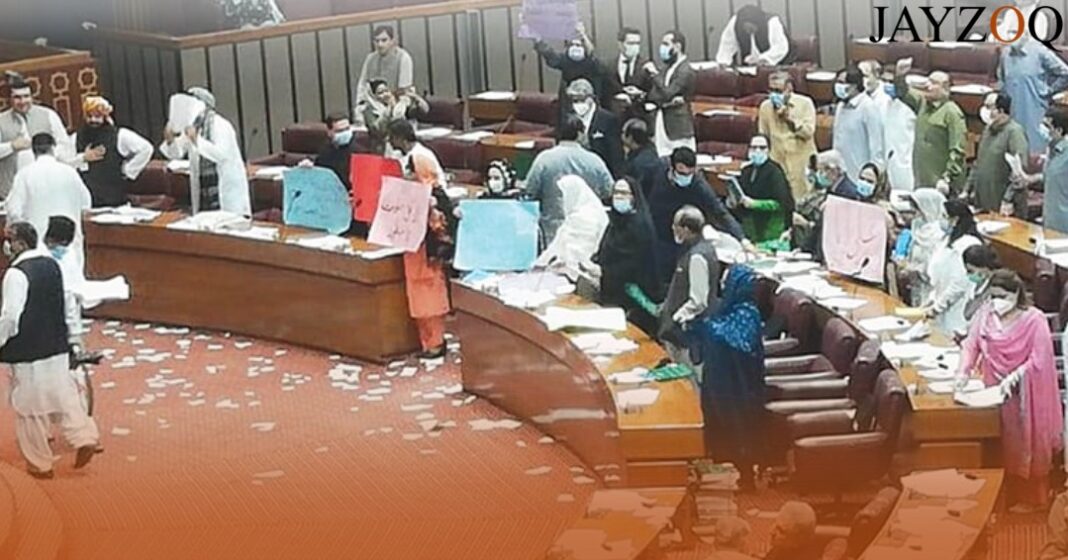 If you live in a country like Pakistan, you would be aware of all the out-of-line incongruities. Governmental failures and political instability are some of them. Not a day passes that we don’t witness our system collapsing under the strain of law and disorder, corruption, incompetence, and wrong decisions.

Recently, the federal government passed the new budget of 2021 and it is very safe to say that it was met with disagreement on a large level. When the budget was proposed in the house on 15th June, the opposition raised out their voices on its relative unfriendliness. The opposition leader, Sharif lashed out at the government that the budget provided no relief for the poor, and had no incentives and job opportunities. As Sharif made his speech in the house, asking the government to hold itself accountable for the corruption and inflation, his words were met with chaos. Footages and images that have gone viral on social media showed members of the government calling out abuse and jeering slogans at Sharif. Then things turned ugly when a budget book hurled at the opposition leader fell in front of him. After that, the house turned into nothing less of a football match. Heavy budget books were chucked by lawmakers of both sides, the government, and the opposition, on each other. Catcalls, anti-government slogans, vile abuses were shouted out across the benches. In a viral video, one of PTI’s MNA, Ali Awan was seen using derogatory words after the fight broke out, as FM Qureshi stood right next to him. He later stated that the abuses were first shouted out by a member of the opposition and he was only responding.

Members from the treasury threw budget books at each other during the NA session on Tuesday. — DawnNewsTV

Amid this mayhem, Sharif was surrounded by party members to protect him from lawmakers from the other side as he made his speech. He tried to keep speaking as books went sailing past him and hit various members. Desks were thumped, small objects were hurled, and jeers were shouted, even after repeated condemnations from the chair. Before the chaos could cause full-blown violence, the National Assembly Secretariat requested its senate counterpart to send some of its sergeant-at-arms to control the situation. But even the sergeants looked helpless and defeated at the vile behaviors from the members of the house. Videos showed the sergeants making feeble attempts to stop PTI’s Murad Saeed who was standing up on his table and throwing books at the opposition.

Similar scenes were seen in the parliament on Monday, 14th June when the members of the government chanted slogans of ‘chor, chor, (thief, thief)’ at the opposition and didn’t allow them to make their speech. The ruckus only stopped when the speaker adjourned the house till further notice. After the violence in the house, members from both sides took to Twitter and blamed each other for the pandemonium. Sharif tweeted that the scenes from the parliament showed what an unethical leader Imran Khan was, and the kind of fascist party he had. Another MNA tweeted that the day was the lowest in the parliament’s history. The media had a field day as journalists sat down together to discuss the events of the day and after tweets from the speaker, several members of the house were banned from the parliament because of their unruly and unparliamentary behavior. At the end of the day, everyone went home, whether they were from the government or the opposition, sporting a bloody eye or two. But they left behind a system that sunk even low in its fragility.

As citizens, who see the house and its proceedings on a screen, we are left pondering on the failure of a system we have. Political instability and incompetence have left us with a country that is fighting for its very soul. Corruption, deceit, bribery, and immoral behavior from the government and its systems have made Pakistan insecure and vulnerable. While some of us do dream about a country ripe in its good days, there are many who play a negative role in achieving the dream. If we want a system that is whole and unpolluted, we, as a nation, need to start with changes, both big and small.