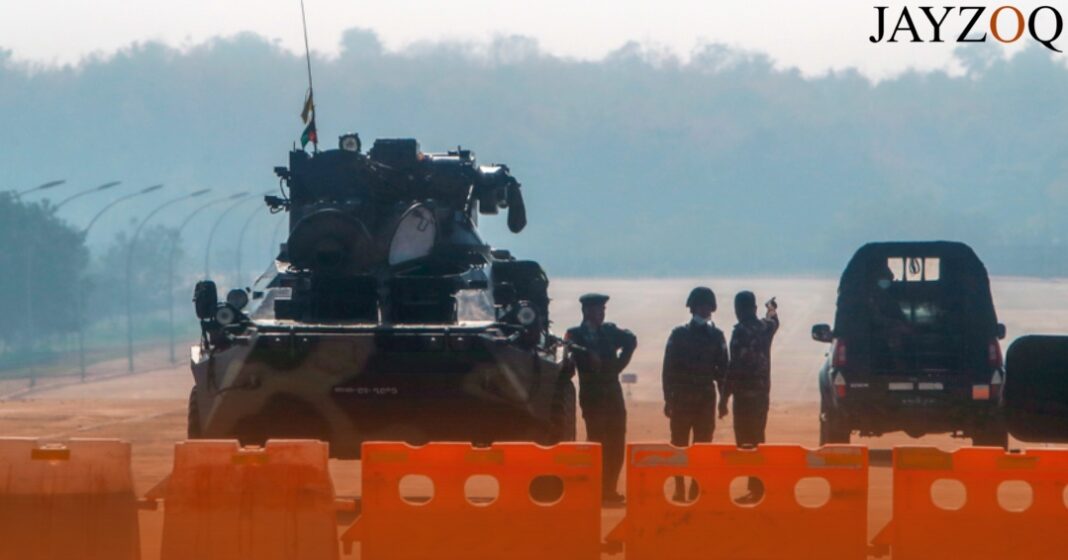 Myanmar, a Southeast Asian nation, is currently facing the worst thing a country’s democracy could face: a military takeover. Since 1st February, the streets are rolling with hordes of angry people as masses came out to protest. The military of Myanmar is patrolling the streets and thwarting people with the use of ammunition. The situation in Myanmar is far from worse, with no steps towards improvement. The question remains  How and when did the military take over the country? How did the people react, and what is the backstage story?

Myanmar: A little behind the scenes

Myanmar, a country in Southeast Asia, was initially known as Burma. But it has long since adapted to the new name, and according to its people, it matters not which term is used. Myanmar has a population of about 54 million, with Buddhism as the main religion. The population includes many ethnic groups, such as the Rohingya Muslims. Myanmar sought independence in 1948 and has been subject to dictatorship rule most of its years of existence. Armed forces ruled Myanmar up till 2011, after which a new government came into power and returned the country to civilian rule.

How did the coup unfold?

The coup unfolded on 1st February, after Myanmar’s democratic leader Aung San Suu Ki’s party, National League for Democracy, triumphed in the general elections. NLD claims that the military has backed up the opposition, who were demanding to recount votes. Although the election commission of Myanmar declared that the claim was fabricated as they could find no evidence of rigging in the elections, the military launched the coup just as a new session in parliament was set to open. Currently, the military commander-in-chief Min Aung Hlaing is in charge of Myanmar. The people’s leader, Suu Kyi, is under house arrest along with other leaders based on false accusations.

Aung Hlaing has long held a significant amount of power and political influence in Myanmar. As a result of using this power against ethnic minorities, he has faced international condemnation. When he took over, he announced that the military was with the people and that he would hold a “free and fair” election once the emergency state was lifted.

Aung San Suu Kyi, a Myanmar leader, is the daughter of none other but Myanmar’s independence hero, General Aung San. She became famous in the 1990s when she campaigned to restore democracy in Myanmar as her father did before her. In opposition to the military through demonstrations and rallies, Suu Kyi instigated the Myanmar people to demand free elections. But she was detained in a military takeover and spent 15 years in detention from 1989 to 2011. During these years, she was awarded the Nobel Peace Prize for being “an outstanding example of the power of the powerless.” In 2015, after her detention period was over, Suu Kyi’s party, the NLD, won a significant victory in Myanmar’s first-ever general elections in 25 years by winning 43 out of 45 seats.

Even after Suu Kyi’s win, she could not become an elected president as Myanmar’s constitution forbade her because of having children who were foreign nationals. Nevertheless, Suu Kyi was, and even now, is seen as the only effective leader in Myanmar. However, despite having an influential reputation, Suu Kyi’s name has been in the mud over the last few years, both inside and outside Myanmar, because of the Rohingya crisis.

The Rohingya crisis started in August 2017, when the Myanmar military ordered a lethal crackdown on the Rohingya Muslims. The latter represents the largest percentage of Muslims in Myanmar, numbering at least one million. Despite this, Myanmar’s government has long denied the Rohingyas citizenship or passports and refuses to recognize them as part of Myanmar. So much so that the population was not included in the census that took place in 2014.

The government believes that the Rohingyas are illegal immigrants from Bangladesh as large numbers moved across the country into Myanmar in the 1970s. But none of these reasons can possibly justify the government’s actions. After it broke out in 2017, the violence reached a peak where the government slaughtered 6,700 Rohingyas. Reports also say that the women and girls were forcefully raped and killed. The troops burned down the Rohingya’s villages, and homes and the victims fled from Myanmar in fear, taking refuge in Bangladesh.

However, Aung San Suu Kyi denies carrying out such acts of atrocities on the Rohingyas. When she appeared at the UN front in 2018, she claimed that the military was carrying out an operation against the terrorists, even after the UN labelled it as a “textbook example of ethnic cleansing.”

What has been the reaction to the coup?

There has been a violent, almost ugly reaction to the coup from the citizens who have long waited for a democratic rule. Reports say that the protests and rallies against the coup are the largest since the Saffron Revolution of 2007. Tens of thousands of people have poured out on the streets in retaliation against the coup, even though the troops banned public gatherings. The protestors include teachers, lawyers, students, bank officers, and government officers.

These protests might have turned out peaceful but the military has used water cannons and live ammunition to disperse the crowds and has even put a curfew in some areas. A woman was shot dead at the hands of the troops amid the protests. As always, the murder aggravated the situation further, and the people, instead of drawing back, have become more ferocious in their retaliation.

The international reaction to the coup has varied from different countries. Australia, UK, and the EU states have seriously condemned the military takeover. The officials from the UN said that “it was a serious blow to the democratic reforms.” USA’s president Biden has announced the Myanmar leaders’ sanctions, asking the military to release Suu Kyi and other leaders. The Chinese government has urged all sides to resolve their differences, but Cambodia and Thailand’s states say the coup is an internal matter.

What is Myanmar’s possible future?

It is difficult to predict anything about Myanmar’s future. However, the public, in wide protests, has made it clear that they no longer want dictatorship. What matters most is the military’s behavior. Will Aung Hlaing, as he promised, hold free elections to restore democracy, or will he resort to violence against the crowds? Alas, this cannot be foretold. We wait, just like the Myanmar people, for the country to have the shackle-free, general democratic rule it had before.