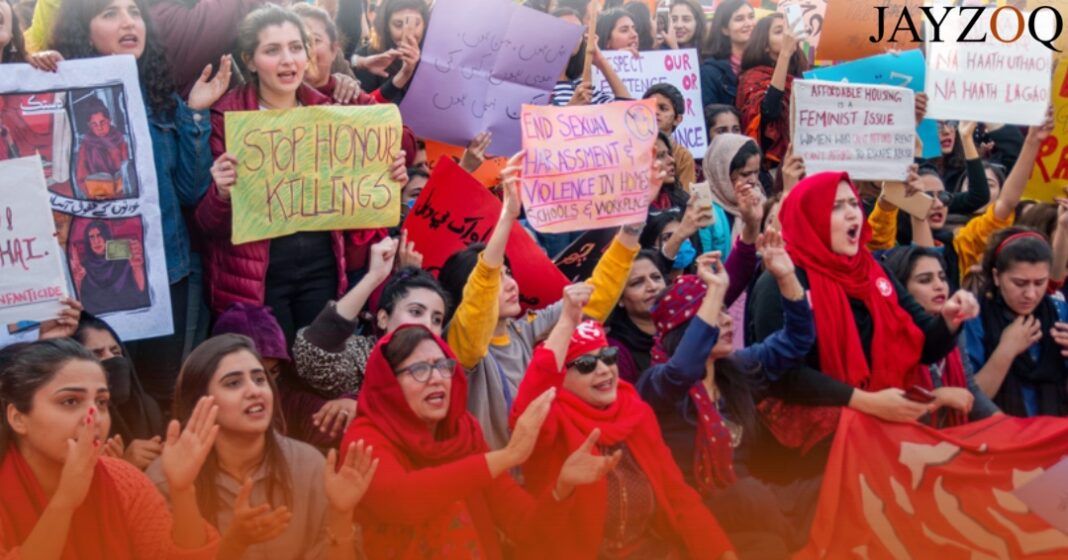 Pakistan – the land of the pure. A country with 11 rape cases reported everyday and 20,000 cases reported in the last 6 years. One of the most dangerous countries for women as reported in 2016. While many petitions and marches are held to plead for change, most are met with opposition from religious extremists and people benefiting from the patriarchal and discriminatory structure of our society. In Pakistan,only 47% of women are literate, whereas the majority have never even been to school. Secondly, 93% of Pakistani women have been victims of physical and verbal harassment.

Furthermore, domestic abuse and gender-based violence are prevalent in the country, where a staggering 32% of women have experienced physical violence in Pakistan and 40% of ever-married women have suffered from spousal abuse at some point in their life. Due to the low literacy rates, women are forced to stay in these abusive marriages as they depend on their husbands for financial support. Another reason for prolonged abusive marriages is societal pressure and the taboo against divorce in Pakistan, which fuels abusive marriages.

Recently the Domestic Violence bill 2021 was opposed by CII, which is the same group of men that said that ‘ a man should be allowed to lightly beat his wife’ A bill for women rights, was voted on and rejected by men. How can the government allow that? Why must women suffer because of what a man thinks?

However, the root cause of patriarchy and discrimination goes deeper. It starts from a young age when schools and other institutions sexualise children. When we blame women for the atrocities of men. When we discriminate against women in education. When a woman is told to be an obedient wife rather than a successful person.

Another way we demean women is when we shame them for dressing in a certain way. Recently, at a notable award show, Pakistani actresses dressed in western clothing, due to which people, specifically men, shamed them and used derogatory slurs against them. To reiterate, men DO NOT and SHOULD NOT be allowed to comment and say how a woman should dress, it is their choice and theirs only.

The recent incident, regarding Usman Mirza and his accomplices, is a prime example of why we need reform in our society. The man exploited and blackmailed the woman into giving her Rs.1.3million after forcefully stripping her down and making a video, which he threatened her with.

We give accused harassers a platform and opportunities but we and the government shun victims of rape and harassment by blaming the victims themselves. We NEED change and we MUST reevaluate ourselves and do better. As Leftistan, an Instagram account helping to give women a platform and helping raise voice against violence said in a recent post,

“The daughters of Eve will forever suffer at the hands of Adam’s self righteous sons. Because a woman exercising her consent will forever offend them a lot more than their kind ruining that consent.”