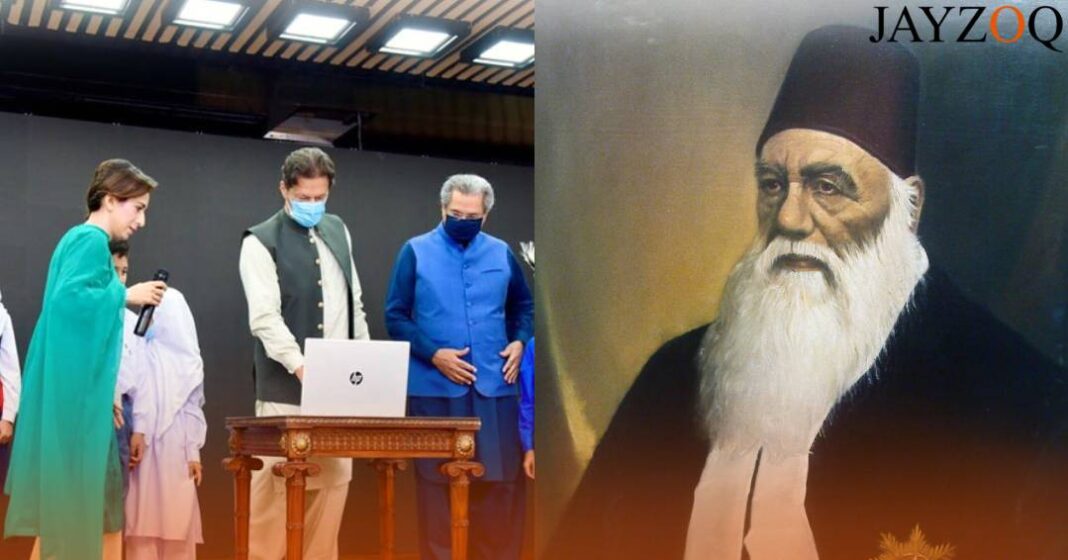 March 27, 1898 was the day the greatest Indian Muslim reformer crossed the Styx and August 2, 2021 was the fateful day his legacy was struck, in all likelihood the first in a long list of subsequent strikes while populists drive the country to the ground, the country he had suffered fatwas for. That day the Single National Curriculum (SNC), one of PM Khan’s navratnas promised during the 2018 trail of (future) tears, was enforced in the Punjab.

This single action is a blatant violation of Article 18 of the International Covenant on Civil and Political Rights, of which Pakistan is an ashamed signatory. It is a breach of free will and the fundamental right of parents to decide the education their children receive. But while writ-brokers were quick to jump on modesty monsters such as TikToks and PUBGs, they too remain silent when the future of the country is at stake, when Niazi arrogance threatens the very fabric of the constitution, its prized Article 20.

It is also a disturbing attack on the 18th Amendment which had handed over education to the provinces. This is also why Sindh has refused Islamabad’s advances on curriculum and academia. But in Punjab, the plan has already commenced, under the authority of Dr Murad Raas, an education minister who fails to differentiate between actual doctorates and honourary ones. The 18th Amendment means nothing to him, nor to Wasim Akram Plus, Imran Khan’s seat warmer in Lahore.

Unknown to most Pakistanis, the answer to the Mullah Problem of today lies in the tutelage of Shah Walliullah, whose inspired students founded the Aligarh University and the Darul Uloom Deoband, centers for rationalism and conservatism respectively. The intellectual descendants of the latter steeped into priesthood and theocracy, envisioning Pakistan as such while Sir Syed’s mantle was taken up by Muslim leaders who would eventually create his dream state.

Today’s system of education, therefore, exists on those lines. Unfortunately for Arif-e-Jang though, his successors were hardly thrilled over the prospect of handling education, when saucier departments such as finance and interior waited for them. Indeed, in the socialist purge that followed independence, most feudalists sided with the ulema to declare socialism un-Islamic and its proponents, including the Refugee Minister Mian Iftikhar-ud-din, misguided. On this basis, they then rejected his historic proposal for land reforms, which still forms the basis of policy today. In return, the religious factions led by ulema such as Allama Maududi won the right to exclusive authority for interpreting Islamic polity that they had been itching for ever since deciding not to oppose Pakistan’s inception anymore. In effect, a parliament independent of the constitutional legislatures.

Once they got hold of Pakistan’s jugular vein, they never let go. Even today, the Council of Islamic Ideology routinely publishes recommendations to make Pakistani law in greater accordance with the Sharia. For instance, in 2014, the CII tried to make polygamy easier by declaring the requirement of written permission from the first wife to be un-Islamic. Furthermore, an ultra-apex tribunal with the name of Federal Shariat Court has in its possession the power to issue notices if it deems any law or judgement un-Islamic.

Education ministers insist that a SNC is essential in removing class disparities in education and realizing and teaching the vision of the Quaid. Let us dissect such ridiculous claims too. For removing class-based education, first it is vital to remove class-based economics and class-based justice. Khan looks for a shortcut, because he knows class disparity is what led to East Pakistan’s breakaway, he knows feudalism is the first step to eliminating exploitation but he doesn’t have the votes nor the will to attack feudal lords, nor even industrialists. He sees what Tareen is doing and he knows he will need campaign donors in 2023. But he will never advance against this exploitative form of capitalism because he is one of its many beneficiaries. Left millions in divorce settlement in England? Why not return the palace at Bani Gala, which violates local residential laws? Besides, it is difficult for the public sector to catch up with the private sector. In the blunder for the ages, instead of elevating the standard for the former, he is pulling back the private sector.

Khan’s education team fails to understand the real reasons why Pakistan’s educational standards are so bad. 22.8 million children are out of school, but no concrete policy has been proposed to tackle this humongous roadblock to progress. 6.65 million people are jobless, discouraging children and their parents from obtaining education. A significant number of teachers in public schools hold conservative beliefs revolving around Islamic-nationalism which are reflected in their classrooms. Teacher brutality in rural areas is not only protected but encouraged. But Khan looks for an easy way out; acknowledgement of the issues is the first step that needs to be taken, and he has done that. But instead of using this acknowledgment to move forward, Imran Khan is actively leading the country backwards. It also doesn’t help his case for unity in class-disparity when army-administered schools and many private schools have started their academic year with their own plans, partly because they understand the deteriorating standard for what the government perceives as education, partly because they haven’t received NOCs and publishers estimate it would be several months before they do. So much for a “single” national curriculum.

Secondly, the vision of the Quaid. Before teaching his own idea of what Jinnah wanted, maybe Khan and his entire cabinet need a lesson in history, because the Quaid had explicitly stated on multiple occasions of the role of women in Pakistani society, but chauvinists like him and Ayub don’t want to believe that. They want to believe that a woman’s primary role is that of a mother and housewife, that all those who are not affected by their “Western clothing” are actually not humans at all; they’re robots. This is what he is teaching the masses that will one day run this country. But independent of Khan, what intellectual authority can the ulema muster that make them capable to understand what Jinnah’s vision was?

How ridiculous is that the people who once labeled Baba e Qaum ‘Kafir e Azam’, who incite sectarian violence against his fellow shias so much so that they went from 25% in 1947 to 10% today, who rejected his entire being, from his secular ideals to his fondness for whisky as a model for Pakistan, from their own dirty houses of sin get to decide what his vision was.

These are the people who influence and coerce electables. In their struggle to transform Pakistan into an Islamic polity, they have left no Bhutto un-fatwa-ed and no reformer Muslim. With the implementation of the SNC, it is only expected to have a mullah at the center of all discussions. Undeniably, the Muttahida Ulema Board now has the legal right to assess all books and academic material for objectionable content with regards to Islam after the Punjab Assembly passed the bill presented by PML-Q’s Khadija Umar. The result is that bearded hordes, most of whom have spent less time in school than a kindergartner, get to object to “obscene” diagrams of the human anatomy in science textbooks, and to the usage of the words “interest” and “markup” in math workbooks.

It is also frighteningly apparent just how little space women and minorities get in this new curriculum. Women are projected as housewives and mothers while men are presented as professionals by default. Islamiat textbooks have been forced down children’s throats, children no older than 11 or 12 years. For non-Muslims, although the option for Religious Studies instead of Islamiat has been ceded generously, lack of educated teachers only makes matters worse for them, alienating non-Muslim students from the rest of the classroom. But don’t take my word for it. A similar horror show has been presented by the Lahore-based policy expert Peter Jacob. Together with a team of educationalists, he found that 9% of the content of a grade 3 English textbook, 23% of grade 4 and 21.42% of grade 5 is in direct violation of Article 22 of Pakistan’s constitution.

But expecting wolves not to hunt is a silly hope. It is not the ulema that I attack in this piece, because I know the hordes will do what they are made to do; it is those who allow the wolves to hunt that are due the harshest criticism. Not to sound like a conspiracy theorist, but a so-called liberal who dismisses capable Ahmadis from important government posts even while promising to recover Pakistan’s brain drain, giving foolish statements on women’s role in Pakistani society as well as in reference to the rape epidemic in the country, carrying around prayer beads in Parliament, opposing the domestic violence bill, promising TLP to kickstart legislative actions to expel the French ambassador, and now to complete Zia’s Islamization by nurturing Mullahs in every school; it all adds up to a grand political stunt: Imran Khan is preparing for 2023.

If we are to find any truth in Western magazines and their many stories on the once-playboy Premier, we are told that his advent into British society (which he now declares decadent) is an actual fairy tale. “Arrestingly handsome and Oxford-educated, albeit with a third-class degree, Khan found the doors of the British aristocracy thrown open to him,” writes Aatish Tashir for Vanity Fair, and proceeds to mention how he was known as ‘Im the Dim’ in elite English circles. But that is where I disagree. Imran Khan is no buffoon, he is no fluke. He is worse; he is evil. He has spent 20 years in Pakistani politics and knows he can no longer count on the populist appeal to the youth that made him Premier back in 2018, and so he must find another vote bank. He is willing to let Pakistan bury itself under ignorance and fundamentalism for the next forty years, just to secure another five-year term. He is willing to let majazi khudas behead the women of his Riyasat-e-Madinah and is willing to mortgage the country to extremists if it means he can extend his premiership.

Religion has always been the easiest and the most important card politicians have up their sleeve. I mentioned how landlords used religion to justify feudalism, but other parties are no better. Nawaz Sharif wanted sharia law all over the country back in the 90s, and used his close relationship with the Barelvi-Deobandi axis to oust Benazir from power. It is only in 2016, when Mumtaz Qadri was hanged that PMLN’s religious power base cracked, and that is something Khan wishes to capitalize on. Even Bilawal Bhutto has made several highly-publicized visits to shrines in the past.

The lesson we can draw from this trump card is simple: it is easier to tear down a mandir than to construct a masjid. When parties wish to cash in to the largely illiterate masses, they create a pinata, they tell everyone this pinata is the cause of Pakistan’s grievances and they name the pinata liberalism. Then, amidst calls of Allah o Akbar, they beat the living hell out of it.

The Pakistani Voices: Making themselves heard