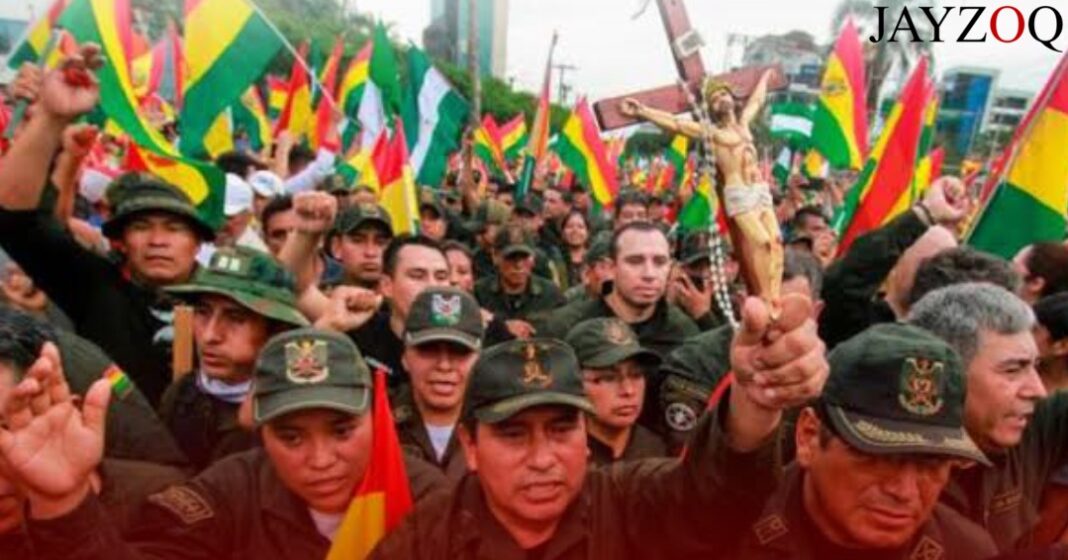 Yet again. How many times has it been now? Twenty? Thirty? Does it really matter? Honestly, it has become a tale repeated ad nauseam. On November 10th, 2019, the democratically elected president of Bolivia, Evo Morales, was overthrown in a right-wing military coup spearheaded by a party which, in the elections of October, had only 4% of the vote. Jeanine Áñez, formerly the vice-president of the Bolivian Senate, declared herself the interim president and promised elections. It has now been nine months since the coup and elections have recently been postponed for the third time in four months, while the “interim” president has prioritised not elections, but policy and mass repression. What’s worse? The coup has been applauded, cheered on, and possibly supported by our favourite preserver of democracy and freedom, the U.S State Department.

Meanwhile, mass mobilizations have been occurring throughout the country with Unions and Councils preparing for one final attempt to defend their democracy, despite the legitimate threat of State violence and repression, which has been characteristic of this so-called “interim” government. History has taught us quite well on just how dedicated these governments are to democracy; they aren’t. The State Department and its cohorts in the media tell us democracy in Bolivia is being slaughtered in the name of protecting democracy. Orwellian, yes, but we fall for it. The thriving Latin American democracy lies in tatters, and the media has shown itself most competent in manufacturing consent for imperialism and fascism.

I believe the introductory paragraph describes well the position I have on this entire scenario. So before going into more nuance, and deconstructing just how terrible the past nine months have been for the majority of Bolivians (Especially their indigenous population), I’d like to shed light on Evo Morales himself. Coming into power in 2006, Morales was the first indigenous president of the country. A predominantly European elite has historically oppressed this majority in the country, which dominated its politics before him. Leading the MAS (Movement for Socialism) party, he attained mass support due to his anti-neoliberal and anti-imperialist policy. Not only did the 2009 constitution he introduced turn Bolivia into a plurinational democracy, but his economic policy added massive stability and unprecedented growth, turning Bolivia into the fastest-growing Latin American country. His social programs lifted millions out of poverty, introduced educational programs which have been such a success that UNESCO proclaimed Bolivia as the only Latin American country to be “free of illiteracy” (after Cuba and Venezuela). His attempts at destroying systemic racism and gender inequality were also applauded by the Office of the United Nations High Commissioner for Human Rights.

Being a democratic socialist, Morales did his utmost to ensure independence from institutions such as the IMF and World Bank. His anti-imperialist rhetoric in the United Nations, accompanied by a refreshing detest for neoliberal capitalism didn’t satisfy Washington, but did increase his popularity back home. Unfortunately for him, pleasing the U.S is much more a priority when one leads a Third World Democracy. Morales even established an explicitly anti-capitalist and anti-imperialist military school for their officers. He is quoted to have said, “If the empire teaches domination of the world from its military schools, we will learn from this school to free ourselves from imperial oppression.”

Evo has been, by all metrics, a successful president loved by the majority of the population. Even now, MAS leads in election polls by a wide margin while worker unions and councils are struggling desperately to see a revival of Bolivia’s successful and stable society. He wasn’t perfect, yes. The decision to run for a fourth term was unconstitutional, even if the Supreme Court decreed it valid. It was a strategic disaster. It is quite understandable since all of Bolivia’s opposition parties are from the same European minority who plunged the country into the abyss of darkness Evo raised them from, but it was still a moment of weakness which was exploited to the fullest by the minority opposition.

Now to the coup itself. Evo won the October elections fair and square. An OAS report released almost immediately after the coup claimed it to be fraudulent and irrevocably undemocratic. This report provided the rationale for the ensuing coup. The OAS report was immediately debunked by a report by the Centre of Economic and Policy Research (CEPR) which concluded that the report itself was fraudulent. Even the New York Times recently released an article claiming the report to be false. The CEPR revealed that the later arrivals of votes from rural precincts (where Morales holds dominant support) resulted in the widening of the gap and the entire report, using statistics and factual occurrences, identified no irregularities in the elections.

But at the time, it was common discourse. It became the official nuance to foreign policy; the States would never be willing to give up.  A prosperous leftist Latin American country which came into power through majority vote? Nope, we shall not tolerate such blatant defiance in our own backyard. We never have, never will. That, in my view, sums up U.S foreign policy quite aptly in regards to the coup. What’s worse, however, is the way the U.S media echoed such sentiments and supported the coup which took place. Sites such as the Atlantic, the New York Times itself, Fox News, and even Washington Post followed along with the discourse created by war-criminals like Pompeo, Trump and Pence. They gave justification to a military coup against a democratically elected president, which placed into power a party that has had 4% of the vote by terming it as an advancement to democracy. The use of the OAS report was the sole evidence to give any credence to such an Orwellian discourse. Now that the OAS report has been debunked to the point of hilarity, such media outlets have shed light on the falsehoods. Yet, there hasn’t been any reflection on their part to the ideas they held as Gospel during the time the tragedy was taking place. This entire scenario provides us with a clear example of how the U.S media, both consciously and unconsciously, echoes and manufactures consent for Empire’s imperialist foreign policy by taking organizational reports as a priori valid. Maybe one should analyze the role the Organisation of American States has played historically in Latin America, the platform it gives to U.S political interference in the region, and the vociferously negative view most of the population in Latin America has of such an institution before taking their fraudulent reports as fact. Democracy died, not in darkness as the Washington Post suggests, but in broad daylight.

Yes, the U.S did have a role in hailing the coup both officially and through the media. But did they have any direct role in orchestrating it? Bolivian media outlet Erbol published a leaked audio recording between opposition leaders and military officials, which called for social unrest before and after the elections. One of the officials mentioned being in contact with Ted Cruz, Marco Rubio and Bob Menendez. Excluding this, not only were the Bolivian Armed Forces and Police Chiefs who have played massive roles in the former coup military and police attaché in Washington but maintained contact with their U.S counterparts as the event unfolded. The U.S distaste for Morales is also quite well known, and USAID has funded many of the right-wing political parties which contributed to the November coup. Furthermore, the role and biases of the OAS also show signs of American involvement. Nonetheless, the cheerleading and support for the coup alongside the approval of fraudulent reports to justify it, do show that the U.S was at the very least quite enthusiastic with events the way they unfolded.

What followed? The new Bolivian government has prioritised fulfilling its fascist tendencies rather than pushing for elections. With massacres of indigenous protestors in the cities of Cochabamba and the small town of Senkata, the burning of the indigenous Wiphala flag in public squares, the arrest of Left-Wing politicians and journalists, the granting of full impunity to the military officials involved in quelling protests and killing protestors in the name of “re-establishing order”, pushing politically motivated charges against MAS candidates and officials while burning down their houses and pushing against union and indigenous leaders on charges of sedition are only a few examples of how tyranny, repression and dictatorial tendencies have replaced stable democracy and growth. The new “interim” government has also pushed back on Morales’ integrationist and anti-colonialist foreign policy by re-establishing diplomatic relations with the U.S and Israel, while certain “economic reforms” have also been introduced. To accommodate a $327 million loan from the IMF, the government has paralysed or scrapped many state projects, especially the Lithium project contract with the German company, ACISA, which gave Bolivia’s state firm a majority share. This economic sabotage has deeply dampened the country’s ability to cope with the pandemic, and living conditions have become extremely dire.

Jeanine Áñez hails from the European elite in Bolivia. She is known for her extremely racist remarks on indigenous people, calling their rituals “satanic” and calling for them to go to the highlands or the deserts. She reflects the facistic mentality of most of the right wing minority opposition, which is predominantly filled with such elites and millionaires. But the question is, what do they hold against Morales? Evo was not a dogmatic communist. His policies largely benefitted not just the lower classes but also relatively benefitted this very elite due to the stable economic growth. Then why the utter animosity? In an interview, Evo called the November events a “Lithium Coup”. He also remarked on the cultural effect his policies had created. The majority of the indigenous and the poor now had equal opportunities to the elite and the white European minority. There was a loss of cultural and intellectual hegemony, whereas the loss of political monopoly with the rise of Evo, and the consequent rollback of cruel, unforgiving neoliberalism which had largely benefitted that sector of the population led to this admonishment. The firm support of the U.S could also be explained through this lens. While Lithium remains a core component of the coup, the former president’s open contempt for U.S imperialism, the removal of U.S diplomats and the independent path of Bolivia in terms of U.S foreign policy consensus (Evo supported Cuba and approved of Maduro), created dangers for the States. Evo provided a different solution to U.S capitalism, and hence could influence not just other Latin American countries but also Americans themselves. This the U.S capital could never tolerate.

As of right now, following the recent postponement of the elections, the National Trade Union Federation(COB) alongside councils such as the Federation of Neighbourhood Councils(FEJUVE) and numerous other unions and regular citizens are preparing for mass mobilization. Bolivian military has shown that it will not resist to spill blood in order to fulfill the wishes of the minority facist right wing opposition and so the utter fearlessness and courage of the people of this rich, diverse Andes region is commendable, yet also tragic.

Bolivia is a victim of imperialism and of facist reaction. While certain capitalist “entrepreneurs” in the West might attempt to make a joke out of their suffering, the reality of the political crises in Bolivia is infuriating and reminiscent of a brutality Latin America is all too familiar with.