Jayzoq
Home The Social Compass The Eradication of Nazism: A Myth? 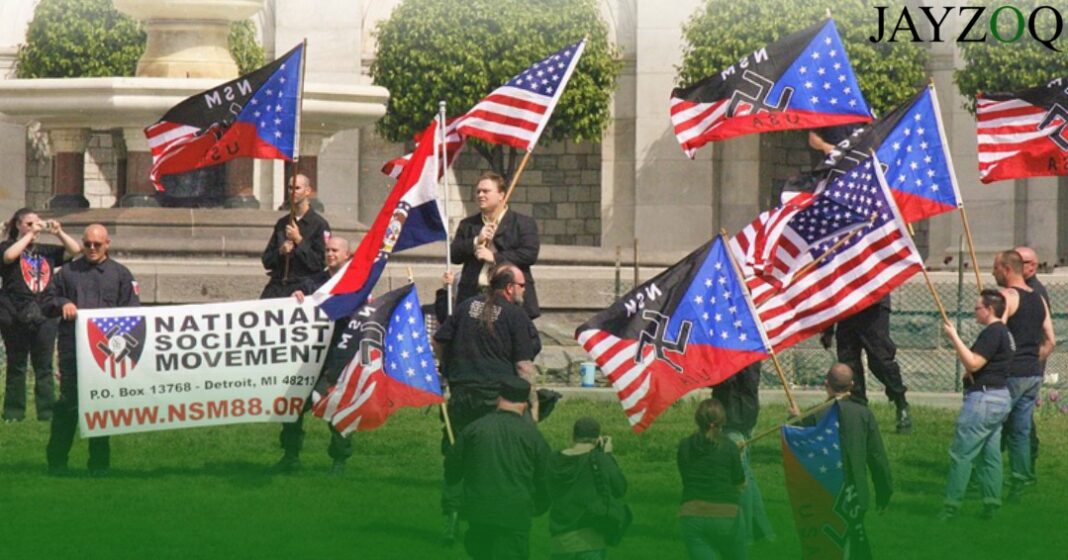 As the disastrous year of 2020 came to an end, the entire world held candles of hope in their hands, assuring themselves that 2021 would be “their year” and everything would fall back into normality. However, on the 6th of January an attack on the United States Capitol building took place which was flooded with hundreds of Trump’s supporters. They waved their abundance and flags, rooting for the prosperity of White supremacy and oppression. Inevitably, social media erupted. Threads, memes, stories, informational posts… everything. The news was everywhere, complementing the start of 2021.

Amongst the chaotic flooding of the capitol attack, a group of people were highlighted which took part in the Capitol attack – Neo-Nazis. These are the people, who despite the end of World War II, carry the same white supremist ideology as Hitler’s Nazis. During the Capitol attack, many people held Nazi flags as they marched through the roads and building. This raises the question: Will there be a Fourth Reich?

Eventually, one of the tweets which were circulated all over social media held the purpose of spreading  awareness about Neo-Nazism. The word “Nazism” must ring a bell in your mind considering that we all know this term from our history books and from the torture wretched upon us by our educational institutions. Most of us never thought of it as something real and prospering instead it was only a mere fragment of a time long gone.  However, Nazism still exists, it was never eradicated after World War 2.

Neo-Nazis still stand with their original ideology: to preserve the purity of the White race. These people are against Jews, people of color or in simple words, anyone who does not fit their criteria of White Christianity. They have been seen using the following slogans: “6 million were not enough”, referring to the holocaust that killed 6 million Jews; or the fourteen words slogan “We must secure the existence of our people and a future for white children”; and “Day of the Rope”, a slogan referring to mass murders of “race traitors” that occur in The Turner Diaries, a novel written by neo-Nazi William Pierce.

Neo-Nazi attacks and protests are not uncommon events. In August 2017, the Unite the Right rally took place in Charlottesville, Virginia, USA. Hundreds of white nationalists, Ku Klux Klan members and neo-Nazis gathered in Charlottesville for a rally that quickly and frequently descended into chaos. It broke into violence rapidly and resulted in several being injured and losing their lives. Racist slogans were shouted and inhuman white, racist people were idealized for their contribution.

The Washington Post reported, ‘“Dylann Roof was a hero!” another yelled, referring to the white supremacist who killed nine African Americans in a church in Charleston, S.C., in 2015.”’

A car plows into pedestrians and vehicles as anti-“Unite the Right” counter-protesters march through downtown Charlottesville. The driver backed up and fled the scene.

It is a misconception that Hitler invented Nazism. Nazism existed way before his time, he only acted as a catalyst by igniting supremist feelings in his people. These feelings have ever since been engraved in the hearts of thousands of people all over the world. A Neo-Nazi organization in the United States of America is the National Socialist Movement. It was founded in 1974 and has ever since organized various riots, protests and rallies all over the states.

Similar Neo-Nazi organizations exist all over the world. The question which remains is: Will Nazism or the obsession with racial supremacy ever come to an end? Will we be able to do anything to stop it?