Jayzoq
Home The Social Compass The Power of Political Poetry: Faiz and his words 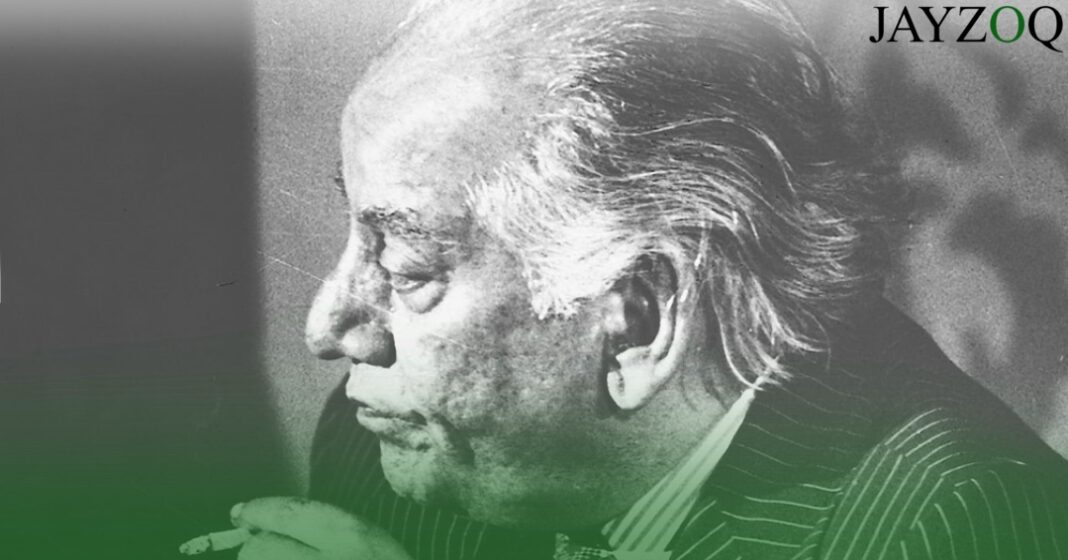 In an article posted on the fifth of December in 2016, on the Literary Hub, Rajat Singh talks about how reading the poetry and different works of the great Urdu writer, Faiz Ahmed Faiz, got him through the month post Trump’s victory in the 2016 US elections. The question which comes to mind is how can a leftist poet, from the sub continent, of the mid twentieth century be connected to an election victory in the USA, a little over thirty years after his death. The answer to that question is quite simple yet insanely intriguing. Throughout the course of this article, I will try, to the best of my ability, to justify this link.

Let’s start with a short introduction of the man himself. Born in the Narowal district of British India in 1911, Faiz did his Bachelors of Arts, majoring in Arabic literature, from Government College University and his Masters in English Literature from Punjab University, both prestigious institutes of modern day Lahore in Pakistan. A self proclaimed Marxist, Faiz gained vast experience in all fields of life before settling on being a writer. From being an army officer in the British Indian Army to broadcasting on Indian Radio, he had done it all. Owing to his background, he became a writer of great repute after the partition of the sub continent. He was even nominated for the Nobel Prize in Literature, such was his expertise with the written word.

Faiz and his revolution through words were of paramount importance to the times he lived in, and they continue to be significant to this day. He raised his voice against the rule of authoritarian leaders, unfair dictators and military establishments in a language that spoke not only to the people of his nation but to the entire world. The reason that his works received traction on a global scale, was because he recognized the problems of the common man and applied simple metaphors to take advantage of the human rhetoric, in a way that no one had seen before. Being a socialist at heart, he was able to speak freely despite the rising threat of right wing and Islamist political parties which did not agree with his ideals of running the state.

Faiz’s carefree attitude and always speaking, or better yet writing, what he felt was right, landed him in a Pakistani prison in 1951, under the allegation of conspiring against the Liaquat Ali Khan administration. He was imprisoned for four years but his sentence was eventually commuted by then Prime Minister Hussein Suharwardy, who had previously also been Faiz’s defense attorney in the same case. He remained in self exile in Russia for several years but returned to Pakistan in 1964. He then worked in a few government positions under Prime Minister Zulfiqar Ali Bhutto who declared himself to be a socialist democrat as well.

Later on, when Army Chief Zia-ul-Haq overthrew Bhutto’s government and executed him, Faiz was left severely disappointed with the situation that his country had landed itself in. He spent two years in Beirut, Lebanon during the Zia era before returning to Lahore for the last two years of his life. He passed away in 1984.

It is important to note that much of Faiz’s radical poetry was written during his time behind bars in Montgomery Central Jail. His most famous nazms include Hum Dekhenge (We Shall See) which talked about a better future free of tyrannical rulers and staying alive in the hope of seeing it one day. Another great work of his, named Mujh Se Pehli Si Muhabbat (The Love You’ve Become Accustomed To) talks about how the ideals of a truly democratic, socialist state had been lost very early on after Pakistan’s independence, all the while pretending through his words that he was talking about his beloved, probably to escape literary persecution, such was the flair in his writing.

It was works like these which made the world fall in love with him and the way he wrote. Seemingly radical ideas were expressed in such a nonchalant manner in one nazm while the next one targeted it so directly that the reader was forced to think about how absolute his freedom of speech was in a country which normally does not grant that right very freely.

It was this very valiance with which Faiz wrote, that a journalist in America found comfort in his ideas and in the notion that if you stood up to the wrong kind of authority for long enough, it will most definitely pay off one way or another. Thirty six years may have passed after the great man breathed his last but his legacy will live on through his expression and words.