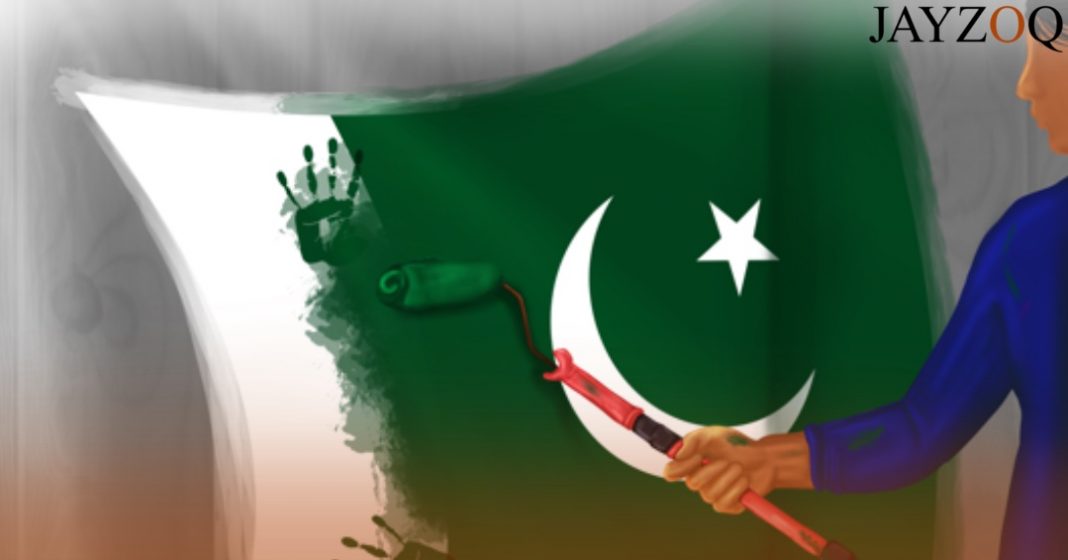 Welcome to the Bigoted Republic of Mullahs

Nearly two centuries after Marx declared religion to be the ‘opium of the masses’, religious beliefs remain to be the most powerful social tool known to man. Nearly 4.5 billion people identify themselves with the four biggest faiths on the planet, thereby offering their spiritual masters, vast control over their thoughts, beliefs and actions.

Pakistan’s current literacy rate of 58% does not help the case of secularism and tolerance, especially when virtually 96% of Pakistanis are Muslims.

“I cannot emphasize it too much. We should begin to work in that spirit and in course of time all these angularities of the majority and minority communities, the Hindu community and the Muslim community, because even as regards Muslims you have Pathans, Pu.” －Muhammad Ali Jinnah

Jinnah’s vision for a secular Pakistan is something our Imams don’t teach us. No one teaches us that his first Law Minister and second Commonwealth Minister was a Hindu named Jogendra Nath Mandal. No one taught us how Jinnah wanted the Muslim League to be renamed the National League, in a letter to Dr Jabbar Khan, former chief minister of West Pakistan.

Since the inception of our nation, religious factions have tried to usurp secularism by imposing Islamic doctrines on the government’s very foundations. In the 1962 constitution, the word ‘Islamic’ was omitted from the official name, and controversy bordered on violence. To cool the ‘sentiments’ of religious leaders, Zulfiqar Ali Bhutto, a member of the cabinet, advised President Ayub Khan to amend it.

To give an idea of the kind of life, the minorities are living in Pakistan, understand that Nadeem Joseph, a Christian, was shot by his ‘Muslim’ neighbours because he refused to leave a ‘Muslim neighbourhood’. While his mother-in-law (who was also shot) is in critical condition, Mr Joseph passed away on 29th of June.

In Rahim Yar Khan, a pastor’s entire family was beaten until they bled their way to the local police station, where they found out that the police had been backing up the extremists, according to reports. There have been instances of forced conversions, especially in Southern Punjab and Sindh, even during the Covid-19 pandemic.

Pakistan has always been extremely vocal on international platforms regarding the protection of minorities’ rights especially in India, when in fact, the capital territory is struggling to construct a Hindu temple for the 3,000 Hindus living in Islamabad, despite the fact that land had been approved in 2017. Governmental departments like the Capital Development Authority (CDA), the Ministry of Religious Affairs, Pakistan Public Works Department and others have worked the plan which has long been marred by the bureaucratic muddle. The Prime Minister has verbally approved the allocation of Rs. 100 million for the Shri Krishna Mandir.

The Pakistan Hindu Panchayat (representative of the Hindu community in Pakistan) received the allotted land in sector H-9/2 in 2017 on the orders of the National Commission of Human Rights. Formalities were fulfilled and the land was cleared of the “seminary students,” who had set up tents on the plot in 2018, according to parliamentarian Lal Chand Malhi. Work had just started when the CDA pulled up at the site and stopped all construction. Although CDA spokesperson Mazhar Hussain cited the lack of approved building plans, experts have pointed out that this legal clause (whereby the building map would have to be approved first) has rarely been used. Politicians like Pervaiz Elahi have joined a voice which argues that since Pakistan was created in the name of Islam, any non-Islamic action would be unacceptable. A petition was filed in the Lahore High Court but it was rejected, with the judge citing constitutional provisions for minorities.

Ideally, the plan should have been proposed directly to the CDA and the Ministry of Religious Affairs, totally bypassing the Council of Islamic Ideology whose ‘advice’ will be sought, in accordance to the Prime Minister’s wishes. What should have happened is for the Pakistan Hindu Panchayat to have been established with a similar level of importance as that of the Islamic Council, since both represent the religions of the local people.

What did happen, is that the government accepted the services of the Council, thereby integrating it as a part of the administration, while the Panchayat remained a non-governmental body of the people. Why should the Islamic Council have any say in the construction of a Hindu temple, when the Panchayat does not have that kind of authority over the construction of mosques? This is because of the deeply rooted belief that (forgive me for my subpar translation) whoever owns the stick, owns the ox.

The fact that Muslims form an overwhelming majority of Pakistanis should not have anything to do with the day-to-day lives of the minorities. The Islam we quote in these arguments, is one which grants full liberty to anyone and everyone to practice their religion without any interference. So when Hindus want to build a place where they can centralize their respective faith and practice their religion freely, or when a Christian moves into a Muslim neighbourhood, or when a pastor tries to spread the word of the Gospel, why do we have a problem with it? Are we so insecure about our spirituality that we eliminate potential rivals? What does this say about our religion, and the strength of our faith?

I cannot say this for Pakistanis in general, but I will say it for myself: the Quiad and his policies are much more important, more valuable and more sensible than policies made by the likes of General Zia-ul-Haq, whose famous, or infamous Islamization policy is probably the only reason why religion continues to play a crucial role in our politics, and our blueprints. Jinnah was a statesman who saw decades into the future; as of yet, his vision (although debatable) is miles ahead from any modern day Pakistani revolutionary. Instead of simply tolerating his words in our history books, they must be understood, felt, and put into action.

Even if we do not want Jinnah’s Pakistan today, it is imperative that we think about the country we wish to associate ourselves with, the country where our children will be able to make decisions about their own faith, without fear of extremists pounding at their door, where the blood of people does not scar our flag to make it brown. In the words of Murtaza Solangi, former Director General, Radio Pakistan, “It’s not about trying to convince the religious zealots that Jinnah wanted a different kind of Pakistan － It’s about correcting our distorted history and letting the people decide what kind of Pakistan they want.”

Hi, why are you saying that Jinnah wanted Pakistan to be a secular state when Jinnah himself said
Pakistan is the premier Islamic State and the fifth largest in the world. . . The constitution of Pakistan has yet to be framed by the Pakistan Constituent Assembly. I do not know what the ultimate shape of this constitution is going to be, but I am sure that it will be of a democratic type, embodying the essential principles of Islam. Today, they are as applicable in actual life as they were 1,300 years ago. Islam and idealism have taught us democracy. It has taught equality of men, justice and fairplay to everybody.’’ ( Radio Broadcast to the People of the United States of America, February 1948

There were instances when Jinnah showed his disregard for a purely Islamic state and there were instances where it was felt that he wanted an Islamic state. This debate has been raging for 70 years, and we are no closer to a ‘decision’ and most likely, will never be; and we cannot imagine what he actually wanted because he didn’t leave behind a single book or a paper, and it is up to us to figure out something from what he did leave behind i.e. his speechs and his dialogues. We apologize if we offended your sentiments but since this is an opinion piece, it is imperative that we voice what we feel, precisely like the way you so passionately have, so that, one day, we can reach a consensus.

Jayzoq is a student-run media outlet that strives to bring to people, free and ethical journalism by analysing the world's greatest issues and providing pinpoint opinion articles. All our members are from the youth community, and most of them are still students, which serves to show that the youth has an important role in shaping the future world.
Contact us: info@jayzoq.com
© 2021 Jayzoq Media. All Rights Reserved.
wpDiscuz
2
0
Would love your thoughts, please comment.x
()
x
| Reply
MORE STORIES