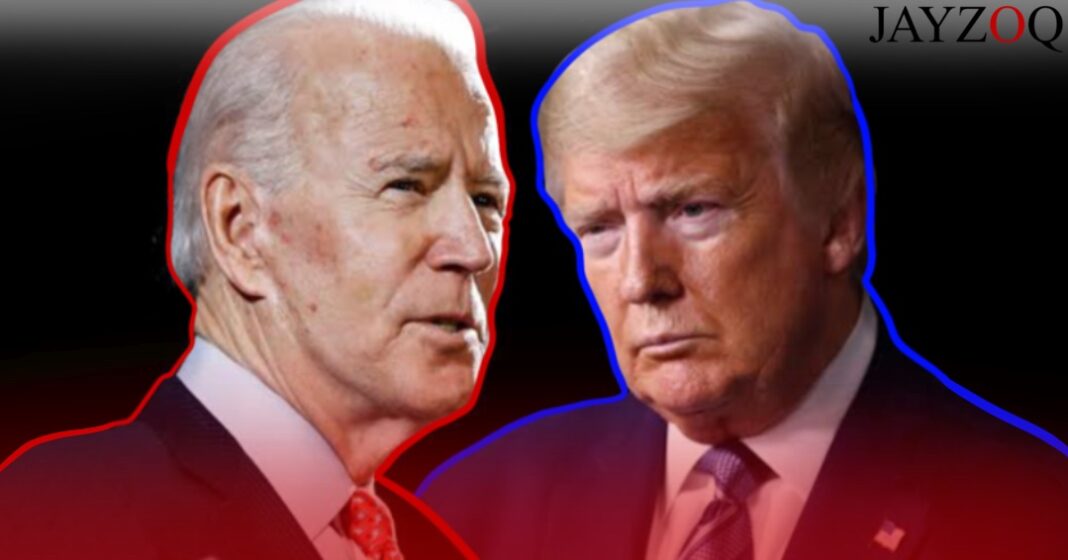 The November 2020 U.S elections come at an abysmal period for the country; a complete socio-economic collapse following the catastrophic handling of the COVID pandemic accompanied with the political polarization ensued by the Anti-Racism protests have put the country in a state of havoc. The economic fallout has been characterized by millions in increasingly permanent unemployment, an eviction crisis which threatens a significant chunk of the population already burdened with student loans and staggering medical bills, a record 32.9% collapse in annual GDP, debt that is set to surpass the U.S economy for the first time since World War II, and further exacerbated with a systemic decrease in productivity which has contributed to the massive accumulation of Corporate Debt (Labelled a “ticking time bomb” by the IMF). Alongside this domestic economic collapse, is a lingering consequence of the waning U.S hegemony on the Global Stage following the ascendency of Trump in 2016. The president’s withdrawal from multilateral alliances and agreements- ranging from nuclear deals to Climate Accords- has been detrimental to the nations international reputation, and his confrontational stance with China and Iran juxtaposed with his utmost cooperation with Israel in the Middle East has become a cornerstone of his foreign policy. With the United States, a ‘unipolar’ superpower for the past 30 odd years, riddled in all sorts of complications in both the domestic and international spheres, how do the upcoming elections fare for the rapidly shifting, post-COVID world order?

Not many would disagree on the argument that the Republican presidency this time around has found itself unable to deal with the pressing issues of the country, both domestically and internationally. Adopting an isolationist “America First” rhetoric from day one, Trump has not only ostracised allies, but has rolled back many multilateral agreements in place with rivals. This includes pulling out of the historic nuclear deal with Iran, and consequently pursuing greater relations with Saudi Arabia to counter Tehran’s increasingly anti-U.S policies in the face of the deadly economic sanctions which has sent Iran’s economy reeling. The tougher economic sanctions were placed to get Iran to capitulate to tougher negotiations, a tactic which proved to be a complete failure. In addition, the president has been vocal about his support for Israel and Benjamin Nentanyahu, going so far as to recognise Jerusalem as the capital of Israel; this has led to widespread criticism on account of Israel’s openly imperialist policy on the West Bank. His deferential attitude towards the Russian president, Vladmir Putin, and the DPRK’s Supreme Leader, Kim Jong Un, has attracted criticism from European allies and has served to further ostracise the U.S from its role as the global hegemon. In Latin America, Trump openly supported the overthrow of democratically elected president Evo Morales, and has also strengthened sanctions on Venezuela with the goal of forcing the Venezuelan people into rebellion against their president, Nicolas Maduro.

90 miles off its coast, Cuba has also been a victim of the Trump presidency, with the overture of the Obama era improvements in relations between the two countries, he has strengthened sanctions on Cuba; in part to lure votes from Florida. His extremely aggressive anti-immigration policies on the Southern Mexican border has also brought disrepute to the United States. In the Global South, Washington has adopted an unprecedented stance of confrontation against Beijing as China continues to threaten the economic power of the U.S through its undertakings in Africa and South Asia.

In addition to this, the disastrous handling of the COVID pandemic has further contributed to the diminishing reputation of America on the world stage. With shortages in supplies and equipment, massive healthcare costs, an underfunded public health system which further disproportionately harms poorer communities, and on top of this a president who has not only been slow in taking appropriate measures against the virus, but has further exacerbated the health and socio-economic fallouts of the pandemic through a lack of coordination between federal and state resources, massive profiteering, and a lack of action against the rising unemployment and lack of safety equipments, the U.S ranks on top in terms of cases and deaths. If that wasn’t all, America has also seen a stark shift towards overt authoritarianism following the George Floyd protests, which has led to international condemnation and domestic polarization. To prove the lack of disconnect the current president has with reality, Trump recently said “I don’t think Science knows”, in response to growing worries over the California Fires, and their link to the global threat of Climate Change. At a time when the U.S needed to step up to its role as the strongest superpower the world has ever seen, its crippling leadership and internal economic flaws obviously failed to deliver.

The U.S has suffered a fracture in its relations with the European Union, especially with countries such as Germany; it is highly speculated that the continuation of the far-right populist rhetoric of Trump is posing increasing worries for the EU, an organization built to prevent the war-torn political polarizations which characterised the brutal European conflicts of the early 20th century. The Trump presidency has consistently attempted to undermine NATO through cuts in funding and even claimed that the EU was created to “take advantage” of the United States, while also characterising itself with isolationist tactics such as withdrawing the U.S from the Paris Climate Accords and even the WHO. Trump’s decision to withdraw 12,000 American troops from bases in Germany was also highly criticised and the mishandling of the COVID pandemic has further tarnished his image amongst the European people. While the relations of the EU and US remain entrenched despite these setbacks, the role of the EU as a staunch supporter of the U.S in its new crusade against China might not be as straightforward if Trump is to be re-elected; a fruitful commercial and non-interventionist relationship of the Union with China might be seen as more favourable to Trump’s increasingly confrontational and far-right view which has contributed to a rise in power of anti-immigration and islamophobic views within European countries as well.

Hence, it isn’t very surprising to see Joe Biden, the challenger to the White House in the November elections, lead the National Polls. The Democrat nominee for this election promises quite a lot, and also very little. Joe Biden has promised to rejoin the Paris accords, the WHO, and restore the “international liberal order” through multilateral alliances, and in general, he plans to reverse Trump’s dreadful policies in his first 100 days in office while restoring America’s image. While he has not been explicit on much of his foreign policy, and the lack of rallies and conventions during this election season, has also exacerbated this vagueness. Biden has been clear on his wish to see the U.S lead a global coalition for the COVID vaccine. He has also stressed on a greater handling of the pandemic at home through free testing and contact tracing infrastructure. In the international sphere, many of his campaign ads have adopted an anti-China- some might even say, sinophobic- tone, and he has called for an international alliance of liberal democracies to confront China. However, he has been vague over his actual policies. Furthermore, Biden aims to restore the Iran nuclear deal, provided that Tehran “returns to compliance.” In regards to arms deals, Biden has been vocally critical of Vladmir Putin throughout his Vice Presidency during the Obama era, and has promised to confront Moscow’s aggression; however, beyond renewing the new START nuclear treaty which is set to expire February 2021, he has offered little details. Speaking of nuclear proliferation, Biden will aim to toughen sanctions on the DPRK, and will return to the traditional model to handle the country by refusing to hold non-conditional meetings. South Asia does not, at the moment, constitute a high priority for either the incumbent president or his challenger. Trump made a massive U-turn on his rhetoric towards Pakistan once Imran Khan came into power, but maintained good relations with Modi to balance out with China. Biden will aim to carry forward a similar policy, but might be much more open about the human rights abuses taking place in Kashmir; his Vice President select Kamala Harris has especially been quite vocal about this. In Afghanistan too, Biden is not likely to shift course on Trump’s decision to withdraw all military troops regardless of political compromise; Biden’s opposition to the massive military role of the U.S in Afghanistan during the Obama era makes this a likely course of action, despite the chaos it might ensue in the region. In all, the former Senator of Delaware has a more multilateral approach to encountering foreign threats, and he will aim to restore relations with allies possessing values compatible with the States.

However, this is easier said than done, and Biden’s objective of “returning to normal” is worthy of critique. The “Settle for Biden” campaign shows a clear lack of trust in Biden’s capabilities, and there remains a very prominent vagueness in the nominees policies, and his opposition against “Medicare for All” amidst the pandemic is telling. Additionally, Biden’s history does not paint a very clean background for the possible future president. Personally, the presidential nominee has been accused of sexual assault and misconduct on more than occasion. As Senator, Biden was the architect of what many now consider the “prison industrial complex”. His 1994 crime bill, and his former support for segregationist figures makes his recent publicity stunts during the anti-Racism protests quite hypocritical. Additionally, he was an avid supporter of the Iraq war, even stating “I voted to go into Iraq, and I’ll vote to do it again”, in 2003. He has been a staunch supporter of Israel, and the Democrats have even declared “iron clad” support for the country. Despite proclaiming Climate Change to be an existential threat, and laying out what a Republican congressman called “a version of Sander’s Green New Deal”, the advisory team Biden has, for tackling it is filled with officials possessing clear interest in the further extraction of fossil fuels; he himself gave controversial support to fracking previously, and environmentalists highly doubt the intentions behind his goals to fight the upcoming Climate catastrophe. His support for “counter-terrorism plus” policies during Obama’s reign have also been heavily scrutinised, and being the candidate bankrolled by Pharmaceutical companies, Biden can clearly be seen as a candidate filled with contradictions and there is no guarantee he will step up to the enormous task of restoring the United States post-2020.

Many progressives, and even those on the Democrat left, have endorsed Joseph Biden. The election campaign framed around him has been one of “not Donald Trump”. However, this lesser-evilism has been a recurring theme in U.S politics, being cited during the 2016 elections as well. However, it might just be this lack of substantial change promised by Democrats that gives the space for far-right populists such as Trump to emerge. As of right now, a new world order is most definitely emerging following the COVID pandemic; America’s diminishing power on the global stage is quite visible, and the only major player provided by the American liberal democracy to restore their hegemony is weak, at best; and utterly vile, at worst.

The World awaits the result of these elections, as it will not only decide the fate of the 330 million citizens of the United States but the entire 7.8 billion global population.