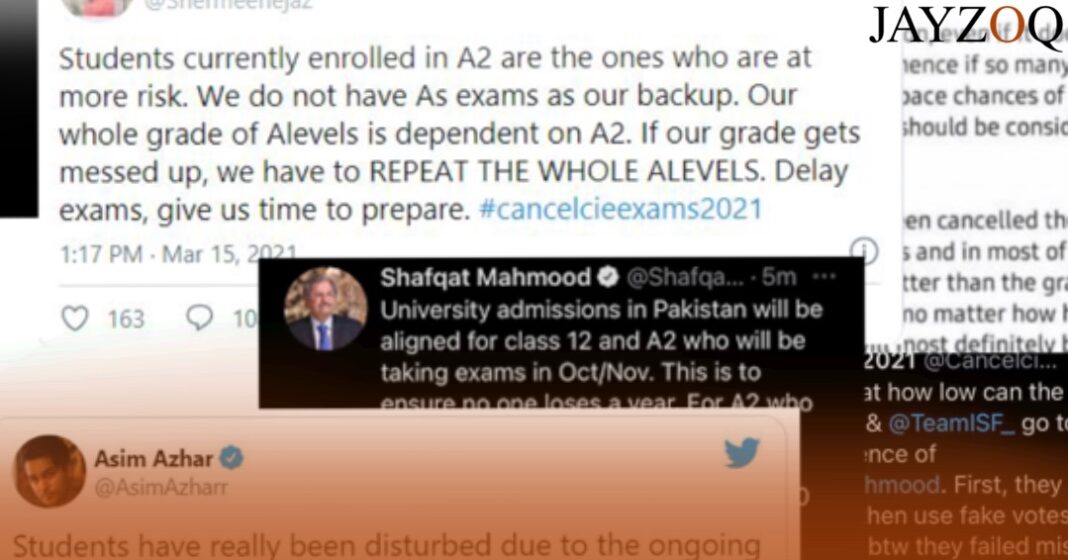 On the 23rd of March 2020, due to the worsening situation of the pandemic and to safeguard the wellbeing of students, Cambridge Assessment and International Education (CAIE) decided to cancel all its examinations for the May/June 2020 session. They then offered 2 alternatives to students; they could either give their exams in the next examination series- Oct/Nov 2020 or opt for teacher assessed grades which would take into consideration the students’ work throughout their academic year. The assessed grades option would save students from wasting their next academic year.

The grades provided by Cambridge were equal to the ones students got by giving exams in terms of recognition and Cambridge made sure that universities around the world would accept them.

The local boards of Pakistan on the other hand passed 9th graders and 1st year students to the next grade, 12th graders were passed with a 3% increase into their marks of 11th grade whereas a special examination series was to be conducted for students who wanted to improve their grades. 10th graders had already had their exams before the start of the pandemic. Thus, they were promoted based on their result.

Schools and colleges in Pakistan resumed physical classes on 15th Sep 2020 however they were closed again from 26th Nov 2020 to 10th Jan 2021 and then again in march 2021. The continuous closure of educational institutes as well as the rapidly increasing covid cases in Pakistan led to students calling out for cancellation of exams in 2021.

At the time of writing, Pakistan has an average rate of more than 3000 positive cases per day.

Many protests were held throughout the country with students- primarily O/A level ones urging the government to cancel examinations and go for School assessed grades as many countries in Zone 4 (the examination zone of CAIE that Pakistan falls in) has also cancelled exams even though the situation is much worse in Pakistan than those countries such as Saudi Arabia and Qatar.

After multiple protests and pleas to the government, who was determined to take exams, the students took to the courts. Petitions were filed in four High courts of Pakistan, the Lahore High Court, the Sindh High Court, the Peshawar High Court, and the Islamabad High Court . All four courts rejected the petition remarking that “Courts cant interfere in policy matters”. Students had raised valid points such as the fact that other countries not having exams in Zone 4, the threshold will be higher than usual, providing Pakistani students with an international disadvantage.

The government then decided to postpone all Cambridge exams, except A2 exams to the Oct/Nov series and all local board exams to after 15th June. This decision spread uncertainty and panic throughout the country. Did the government expect AS students to spend 3 months of their final year of college giving exams of the previous year and then prepare for A2 exams, apply to universities, take college tests in just 4 short months? Secondly, this decision again put Pakistani students at an international disadvantage as while students around the world will be getting school assessed grades and studying for the next years exams, Pakistani students will be doing both: giving exams and studying for the next year. Thirdly, O3 students will be preparing for both their 5-8 O’levels subjects and their 3-5 AS subjects together.

The other concerns raised by CAIE students were that:

Private Schools throughout the Country, such as Roots Millennium, LGS, Aitchison College, Beconhouse have also voiced their concerns and appealed to Cambridge and the govt to opt for school assessed grades as they are the best alternative available to students.

Ceo of The Millennium Education on school assessed grades

The reluctance of the Pakistani government to opt for school-assessed grades is due to a simple reason. While other governments made policies to counter the effect of covid on education and to create a system that ensured education in the face of the pandemic was not affected, the education ministers of Pakistan took no such precautions.

Private O/A level schools had tests and assessments throughout the year to ensure they were ready if they needed to switch to school assessed grades. However, the local boards were not prepared due to inconsistent and outdated educational policies of the country. If CAIE was to switch to school-assessed grades in Pakistan the government would be asked to do so for the local boards as well, which is something they are unprepared and unequipped to do.

Conclusively, it is necessary that Cambridge provides Pakistani students with both an option to opt for school assessed grades, which it still can if the Government asks them too or to take exams later in a different examination series so that Pakistani students don’t have an international disadvantage and can progress to the best of their abilities in the face of the Pandemic.

Respect thy scholar: the life of a Gen Z student