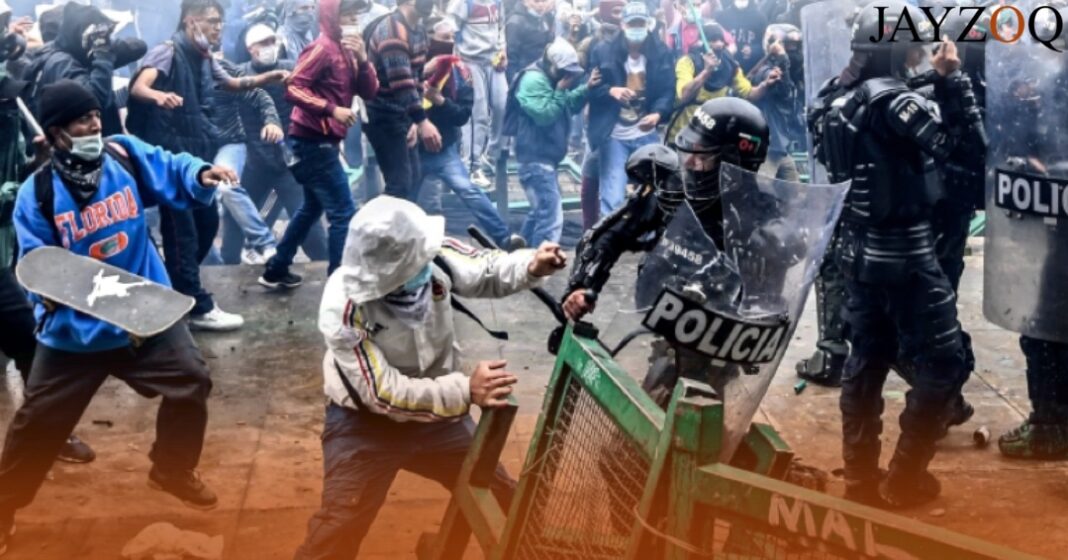 In April, Colombia’s president Iván Duque Márquez proposed a fiscal reform that sparked outrage among the people of the country. The worst of the new fiscal policies included an increased tax rate on products such as food and utilities, the removal of various income tax exemptions and a decrease in the threshold of salaries that would be taxed. The tax revenue would be used to fund Ingreso Solidario, a universal basic income social program that had been introduced to help improve Colombia’s economic conditions. The country has been facing its worst economic crisis in decades due to the Covid-19 pandemic. More than forty percent of the population lives in poverty and unemployment has been increasing.

The majority of the people of Colombia did not think that an increase in taxes was worth the desperate attempt by the Duque government to fix the failing social program and took to the streets to protest. Nationwide protests came as a response with tens of thousands gathering in Cali. During this protest, the statue of Spanish conquistador Sebastián de Belalcázar was torn down by Misak protesters. Later in the day, tens of thousands more protested and clashed with authorities in the city of Bogotá. This prompted the government to increase police presence in the streets. Several more protests occurred in various cities throughout the country. On the first of May, which is International Workers’ Day, tens of thousands of people protested in one of the largest demonstrations during the wave of protests. A day later, President Duque announced that the proposed tax reforms would be withdrawn.

However, it was too late, and protests continued. The people of Colombia were not satisfied with just the removal of the reforms. Decades of living under a poor economy had angered the public. Protests were still going strong by the 20th of May. Roads were blocked by civilians, prominently in the departments of Cauca, Huila, and Valle del Cauca. These blockades caused shortages in food and gasoline and made it harder for exports to leave the country.                The protests had mostly been peaceful. Though significant violence did still occur. This is especially true for the larger ones held in Cali and Bogotá. Several buildings and vehicles were set on fire and vandalized.

However, the ruthless response of the heavily militarized police of Colombia has been the major reason for the increasing violence. As of right now, the protests have caused the deaths of 47 people, 39 of whom were protesters killed by the police (though human rights groups claim that the number is as high as 63), there have been over two thousand alleged cases of police brutality and around two hundred people have been reported missing. Other consequences include an estimated loss of over $2.69 billion for the country due to the protests and road blockages.

The reason the proposed reforms caused such an outrage is because of the already terrible economic conditions of the people of Colombia. The protests also embody the growing emotions of anti-imperialism from a people frustrated from seeing their country being used as a mere pawn for US imperialism in Latin American. Moreover, as stated before, the people of Colombia have been living under a failing economy for a long time, the pandemic just worsened it. The government’s decision to increase the public’s burdens with more taxes shocked them.

It seems as if the ruling class expected the people of Colombia to remain largely silent and accept whatever policies they choose to pursue. And when the people decided to revolt, they used brutal force to suppress the protesters with the excuse of keeping order.