Jayzoq
Home International Relations US-China Relations at their worst: Does this mean a second Cold War? 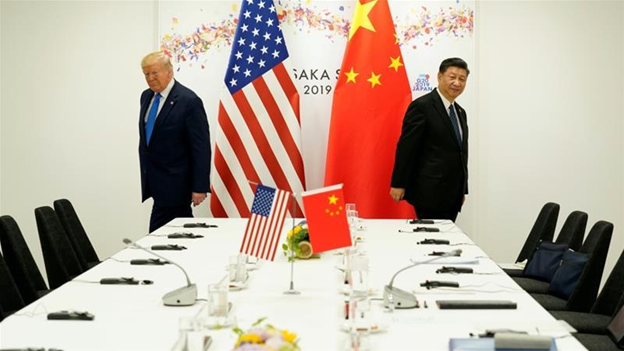 The US and China have been at odds with each other for a while now, more so after the spread of the Covid-19 pandemic. Both countries have had an ongoing trade war since 2018, after changes in economic policies. The trade war has impacted the economies of both countries immensely and it appears to be only getting worse as time passes. Tensions have heightened due to many incidents this year that have led to a rapid deterioration in bilateral relations between both powers.

One of the biggest reasons for the increasing tensions this year is the origin of the Covid-19 pandemic in China. US President Donald Trump has been blaming China for not taking proper precautions and even went as far as to accuse them of engineering the Covid-19 virus, although he didn’t cite any proof. In this regard, the US has also started the process of withdrawal from the World Health Organization, claiming that they’re biased towards China and haven’t been able to handle the pandemic effectively. This process will take at least a year and will have a great impact on the work of WHO. Many political figures all across the world have condemned this decision but there seems no plan of its reversal under the Trump administration.

Another important factor in the decline in the US-China relations is the Hong Kong Policy Act, which the US has strongly condemned. It has led the US to revoke Hong Kong’s preferential status under the Hong Kong Human Rights and Democracy Act, reasoning behind it being that Hong Kong’s autonomy has been compromised by the Chinese reforms. This revocation has had a huge impact in the US-China Trade relations and it is predicted to cause further issues in the future.

The revocation of Visas of many Chinese politicians for undermining the integrity and autonomy of the citizens of Hong Kong has also been a cause of tensions. The visas of Chinese students with ties to the Chinese military have also been under scrutiny and the Trump administration has even threatened to revoke their visas. However, it is hard to identify the students with such ties hence this threat is difficult to carry out, albeit the US efforts to do so.

The US has also condemned China’s concentration camps for the Uighur Muslims multiple times and has used them as another factor to condemn China and make policies in effect to this cause. In addition to this, the US has also put tariffs on various Chinese trade companies and said that China’s claim on the South China Sea is not legal. This has been the cause of confrontations and might be one of the major reasons for friction between both nations.

Many media outlets term this as President Trump’s re-election campaign strategies and have cited examples of him supporting the Chinese actions before the pandemic hit which ended up costing him a huge number of voters. There is a possibility that these accusations might be true but regardless, the fact remains that the US has made utmost efforts to isolate China and to bring them down economically and politically in front of the international community.

As for China, they have responded to these actions of the US with words only and have not retaliated as immensely as was expected. Besides imposing trade restrictions and attacking the US economy the same way that the US is attacking their own, the Chinese government has kept a very calm and non-reactive response to the US efforts of crumbling their global position.

One hypothesis for this reaction is that the US actions haven’t harmed China the way they were meant to and contrary to the expectations of the US government, their actions have led China to get more support from the international community and has fortified its relations with major world powers, isolating the US and giving China more control over the world than before. It still remains to be seen how US-China relations will be affected by the elections in the US but it won’t be far-fetched to say that regardless of the outcome of the elections, there is little hope for improvement in the bilateral relations and they are more likely to deteriorate further than to improve.

The worsening of the US-China relations has been a cause of great concern for the world and remains as such, even now. This is because both countries are world powers in their own right and any conflict between them would have a profound impact on the whole world, whether in terms of trade, politics, war or any other aspect. If the bilateral relations continue to deteriorate, the possibility of a second cold war wouldn’t be unlikely.

This prediction is a major cause of alarm as the first cold war ended with the disintegration of the USSR and major changes in the world map. Due to advancements in many technical fields, a second cold war would be even more disastrous than the first. It could also cause major losses to both countries in terms of capital, manpower and other important resources. However, the true extent of the effects of all these events still remain to be seen and it’s too early to say how it will look like at the very end of it all.