Jayzoq
Home International Relations What War Does to People: The Armenia Azerbaijan Conflict, A Prime Example 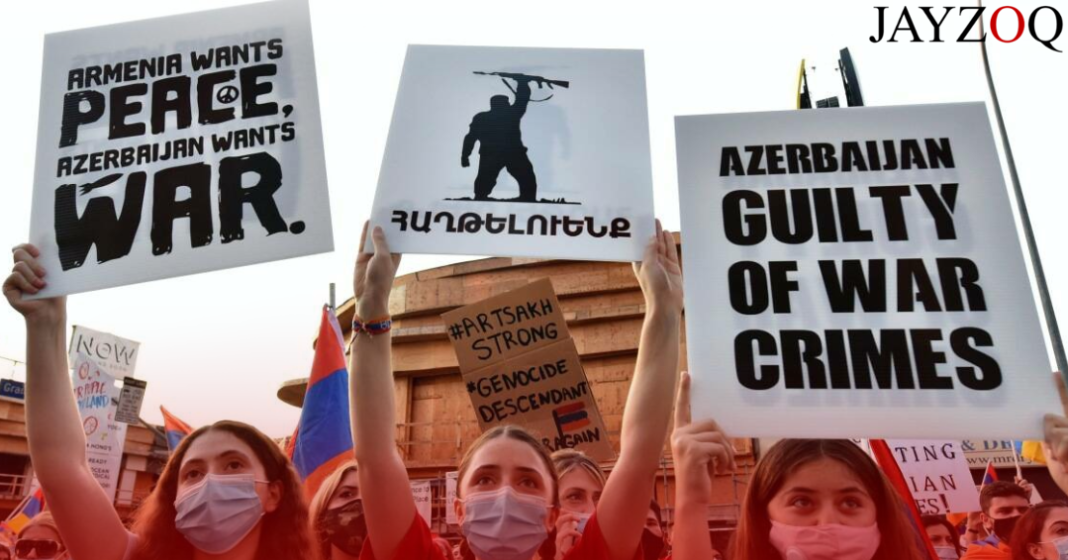 This week- in pure 2020 fashion- saw the eruption of long-standing military tensions between Azerbaijan and Armenia: two former Soviet states.

Before declaring independence in 1991, calls for the majority Armenian Nagorno-Karabakh region to be merged into Soviet Armenia began. The region was an autonomous district- part of Soviet Azerbaijan. However, the issue remained largely peaceful before the collapse of the Soviet Union because of the Union’s emphasis on downplaying religious and ethnic differences and promoting worker unity across religious-ethnic lines.

Perhaps expectedly, the dispute erupted into full fledged violent conflict following Azerbaijani and Armenian independence declarations. By this time, the Parliament of Nagorno-Karabakh had voted to join Armenia before being dissolved by the Azerbaijani state. A violent independence movement started in the region. Armenia supported the independence fighters against Azerbaijan and by 1994, Azerbaijani forces were largely driven out of the area. What followed was an unusual legal limbo for the region. Internationally, Nagorno-Karabakh continues to be recognized as a part of Azerbaijan while the region itself has been autonomous.

Armenia, Azerbaijan and the Nagorno-Karabakh enclave

Ever since, military and diplomatic tensions between the two neighbors have grown if not remained stagnant. This month’s incident was not unusual as military skirmishes between the two states have taken place since the war in 1994. Both sides blame each other for the escalation with numerous civilian casualties.

However, throughout the three decade old conflict, the real victims are the residents of Nagorno-Karabakh. The situation reminds me of Kashmir: a mountainous region embroiled in violent conflict between India and Pakistan. At the end of the day, it’s civilians who suffer and the situation’s no different in Nagorno-Karabakh. Since clashes between Azerbaijan and ethnic seperatist Armenian forces broke out on Sunday, September 27th, dozens of people have been reported killed and hundreds wounded. Despite what the governments might say, the suffering of the people in such dire circumstances cannot be fathomed by anyone who has not suffered the same way.

An exact number of casualties cannot be determined as both sides contradict each other’s statements. However, the latest report came on October 2nd when an Armenian new agency reported the death of 830 people.

Turkey has been very firm about its support of Azerbaijan whereas France, Russia and the US have called for a ceasefire and a political end to the issues at hand. However, the advice of the superior world powers has not been heeded and the conflict continues, which only seems to be escalating.

During a war, those at the forefront of the action are the soldiers who personally have no investment in the fight going on but are present there out of love for their country and homeland. This love causes them to put their lives on the line, leaving their families alone and helpless. The people in power, however, care more about their reputations and the recognition of their superiority rather than the pain of the people they subject to such horrific incidents in the name of justice.

Throughout history, war is seen as a product of human flaws like greed, fear and revenge. This incident is no different. The reason for the persistence of this conflict over the years is because both sides fear that their demands will not be met, specifically the Armenian call for the contested land’s separation from Azerbaijan. While Armenia has declared willingness to begin negotiations, Azerbaijan has refused to any and all talks on the matter. This points to a possible elongation of a conflict that shouldn’t have reached this point in the first place.

The aftershocks of war ripple through time and leave a lasting impression on those subjected to its cruelty. However, there appears no way that the war torn civilians and military officers can be helped unless their respective authority figures can cooperate and come to an agreement that satisfies both parties. The international community is working hard to achieve just that but it isn’t apparent if there can be any success in that endeavor.

The people might not be completely sheltered from the effects of war, even after a ceasefire comes in effect but preventing the prolonging of this conflict might prevent some long term effects on the countries subjected to it.

THE YEMEN CRISIS IS PROOF OF HOW HUMANITY HAS FAILED