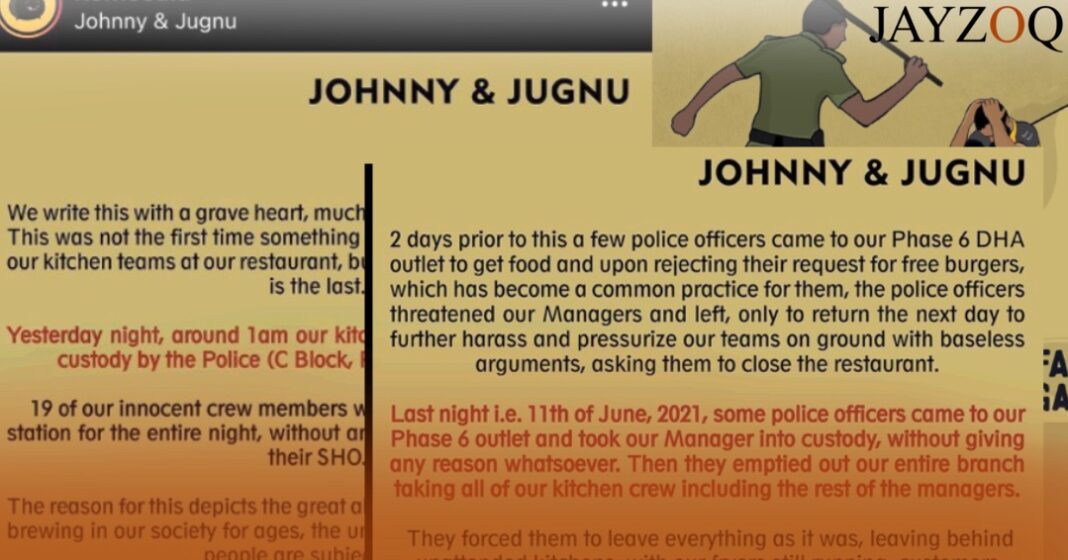 Renowned restaurant Johnny & Jugnu, has joined a growing list of the victims of police misconduct. In an Instagram post, the restaurant has accused the local police of misconduct and “abuse of power”. Reportedly, this event occurred on 11th June at their DHA Phase 6 Sector C location, wherein flagrant violation of legal conduct the police hauled off 19 workers in their vehicles. The workers were then taken to the local police station and locked up. According to the official statement of the restaurant, the workers including the Manager were not notified of the charges they were being detained on.

The legitimacy of these claims has been verified by their neighboring cafe Wabbi. In a series of tweets, the cafe which is located in the same building as Johnny & Jugnu has verified these claims of police misconduct and brazen abuse of authority. The restaurant claims that this is not the first time the police have misused its authority to harass and intimidate its workers for “free burgers”. Before detaining 19 of its workers the police had been demanding free food from the workers. According to the restaurant, this had become a “common occurrence”. As the cafe Wabbi also recounts how “This is not the first time it has happened. With JJ, with other restaurants too. They entered our premises with no masks, this wasn’t about security. This is about ego….

However, on 11th June the police entered the building and apprehended JJ’s staff on undisclosed charges, forcing the place to abruptly shut down. The staff was then detained for 7 hours at the Defence C Police Station. Meanwhile, the police is also accused of manhandling their workers for denying their “special request” for free food.

Not only are these actions of the local police an infringement of the Code of Conduct 2011 for Punjab Police Officers but they also reveal the deep roots of corruption and injustice in the institution. The growing list of the victims of this injustice indicates a vital need for accountability and transformation within the institution for the eradication of these elements of corruption and intolerance that affect citizens in their daily lives.

The incident sparked outrage over social media where citizens voiced their strong opinions against this abuse of power using hashtags such as  #MuhafizSayHifazat and #SHOGardi on Instagram and Twitter. Following this outcry on social media, the official Twitter account of Punjab Police has confirmed the suspension of the SHO and the police staff involved in the incident.

The swift action taken by the IG of holding the staff and the SHO accountable is commendable and a positive step towards social justice and harmony.

India and its Declining Tolerance