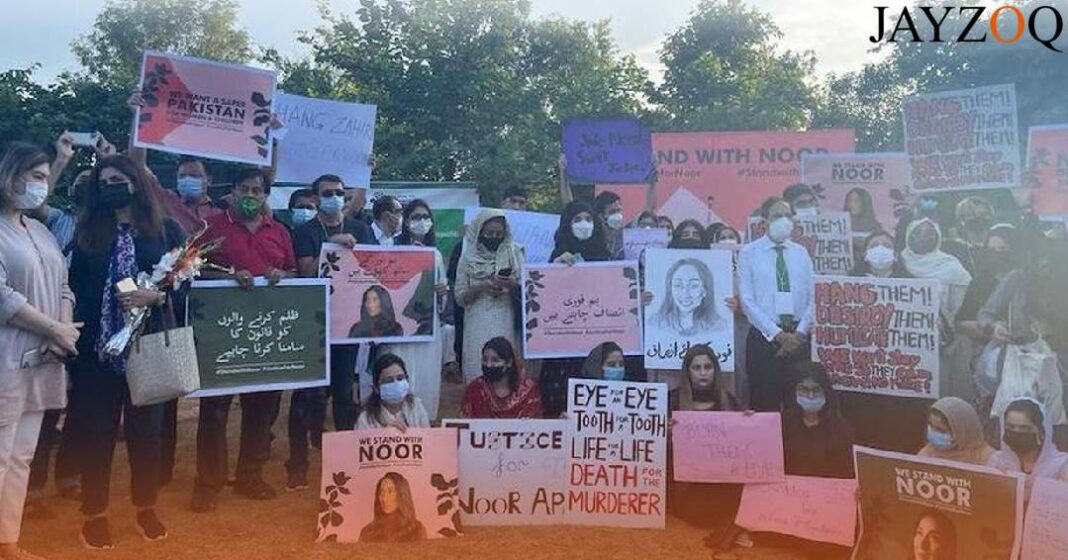 A murderer, wearing a veneer of respectability, thrived in a society that willingly or unwillingly kept fuelling his self-inflated ego, making the rogue safe and snug in his shell that reeks of privilege and patronage at its worst. The gruesome murder of Noor Muqaddam has faltered the entire nation, trembling with indignation at this injustice. This incident has rightfully brought the cracks in the chalice of Pakistan’s justice system under intense scrutiny.

Zahir Jaffer is a classic case of ignoring consensual boundaries and rejection; thus projecting his denial in the form of violence. Masquerading in the guise of a therapist, Zahir was indeed the one in need of therapy. Having an extensive criminal history of being involved in harassment and bullying, he has always escaped accountability. Zahir’s lack of remorse after beheading an innocent soul is far from human nature.

Zahir Jaffer.tells media, “My life is in danger”.

The mystique surrounding this case is largely related to the astounding amount of abettors who enabled this murder, ranging from his parents to his gardener. We know that there is a contagious problem in society because Noor tried to escape her fate a total of six times, yet no one came to her aid. This problem highlights nothing else but the deeply ingrained patriarchy and authority of the elite in society.

Over the years in Pakistan, we have seen a conspicuous rise in gender-based violence with varying degrees of misogyny. Henceforth this isn’t the first instance where such behavior is being portrayed by men against women where it was evident for all, that the shackles of patriarchy blinds one’s conscience. Where does it stop and who will make it stop?

The extent to which Zahir’s vile mind went to fulfill his sadistic pleasures might seem something unfathomable if not for the overwhelming amount of evidence, the countless testimonies, and the eyewitnesses of the incident. However the question which arises is, why does he continue to breathe the same air as those who are grieving the loss of Noor Mukaddam, those who are seeking justice for her?

From being allowed access to home-cooked meals and appearing before the magistrate in fresh suits, to being granted visits in his solitary confinement, Zahir and his family enjoy all sorts of privileges and high security in Adiala Jail. Zahir who was previously also taken to PIMS hospital just for a mere headache, on Monday 6th September, reportedly threw a tantrum at the press, claiming that they were, ironically enough, ‘invading his privacy’. His mother on that same day snatched a reporter’s phone who belonged to GEO news and deleted a video of herself through the aid of police officers.

A worry that possessed the observers is as to why during a public court hearing only three media personnel were allowed inside, and upon being questioned, the police officers had no adequate response to clear the air. This impunity and VIP protocol that comes with the culprit being an elite figure is one facet of this fiasco, that has left the entire nation enraged. As Fatima Bhutto wrote in her tweet, “ Zahir Jaffer’s privilege exposed like this stains all pretenses of law and justice”.

This period is surely going to be hard for Noor’s family and friends, who are constantly under the public eye, deprived of the solitude to grieve the loss of their beloved. We all know that somewhere Noor is waiting on the people of this nation to get justice delivered for her. As flail as it may seem, the extended remands, the distorted facts, the favors, and bail pleas, all warn of a grisly failure of the justice system but this time we can not allow Noor’s murder to become lost in the myriad of Pakistan’s crime statistics. With an elaborate amount of details still being revealed about the case, the state must understand that justice delayed is justice denied.