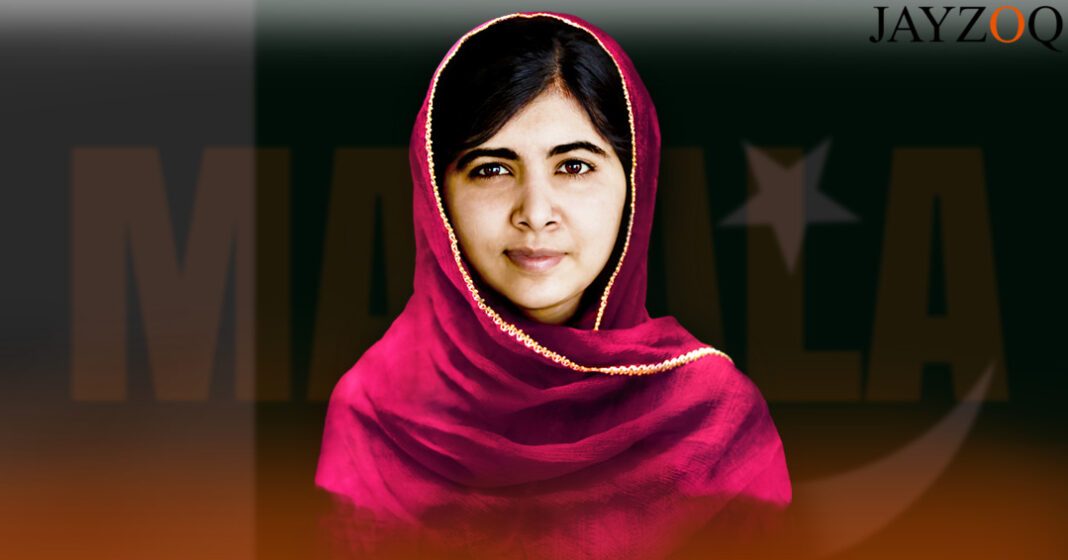 *Disclaimer: This is an opinion based article. Views expressed by the writer in this article are their own, and do not necessarily reflect ideas of Jayzoq.

On October 9th, 2012, a school bus in Swat, Pakistan, was stopped on its way, and a 15-year-old girl aboard it was shot by men later identified as The Taliban. The bullet had hit her head, and she fell unconscious. She was timely moved to a military hospital and then into an intensive care unit in England. After days in a medically induced coma, the girl woke up in a hospital in Birmingham, England. After months of staying in the hospital, undergoing several minor surgeries, she fully recovered and was allowed to return to her family in England, where she has been living since. The girl is Malala Yousafzai, and her story is nothing short of conflicting emotions and opinions in her own country.

Malala hails from Mingora, the largest city in Swat Valley on the northern side of Pakistan. Before getting shot, she used to attend a village school and was passionate about acquiring knowledge. In the same context, she blogged for the BBC about her views on women’s rights and education. As per Google, her life before and after getting a bullet to her head is summed up as ‘Malala defied the Taliban when she was a young girl and is why education is available to some, if not all, girls in Pakistan. As an activist for female rights and the youngest Nobel Prize laureate, Malala is a growing inspiration for women all across the globe.’ But this is what Google says, and while Google mostly agrees with common opinion, it has gone woefully wrong this time.

Malala may be an inspiration to people in the West, but she is considered a national disgrace, humiliation, and a conspiracy of the West in her own country. The reasons are many, some more substantial than the others but not without conviction. Objections against Malala started when she was shot, even questioning that very event, and continued to do so. When Malala was awarded the Nobel Peace Prize, it sparked outrage as they considered it unjust and unnecessary. When she announced she had joined Oxford University for higher studies, this too was met with hostility from Pakistani media. Malala’s recent views about marriage have led to the greatest ever outburst against her, as has her inclusion in a grade 7th Pakistani textbook.

In an interview with The Vogue in July 2021, Malala stated that she doesn’t understand why people have to get married. “If you want to have a person in your life, why do you have to sign marriage papers, why can’t it just be a partnership?” she said. This highly controversial statement had Malala face a lot of backlash from Pakistan’s end on social media, and rightly so because there’s no place in our society for a view as obscene as this one. Her opinion of the matter contradicts the very basis of Islamic and national law. Through her statement, she suggested people live together without marriage or Nikah, as called in Islam. This act, if done, is nothing short of adultery and is strongly condemned in Islam. Many users on Twitter commented that Malala was advocating people to forgo family systems and morals, which is in  direct opposition to her country’s values. Another user said that Malala had proved she was more of a western girl than a Muslim one. Keeping the criticism short, Malala went way too ahead in her statement, which makes people believe she holds views that are highly un-Islamic and appalling.

But the controversy against Malala didn’t stop here. She was recently in the spotlight again when her picture was published in a grade 7th textbook in Pakistan alongside other inspirational figures and heroes. The page featured Pakistan’s founder Muhammad Ali Jinnah, national poet Allama Iqbal, reformer Sir Syed Ahmad Khan, and a few others along with Malala. Naturally, this inclusion was met with strong opposition among a nation that already detests Malala and her controversial views. People lashed out that Malala did not deserve a place next to some of the nation’s most significant people. Following the publication, teams from Punjab’s Curriculum and Textbook Board visited bookshops and seized all the available copies. Meanwhile, the book hasn’t passed the inspection test either.

A day after the book controversy came to light, the All Pakistan Private Schools Federation launched a documentary, ‘I am not Malala’ to educate tens of thousands of students on Malala’s controversial views about marriage and her insincere promises of protecting women’s rights. APPSF’s president, Kashif Mirza, said that “The idea behind the documentary was to expose Malala among the youth so that they don’t get impressed by her so-called story of the struggle for women’s rights.” Mirza also stated that the book ‘I am Malala’ had highly scandalous material which he believed to be against Islamic practices, religious ideology, and Pakistan’s military. These are some of the reasons that the book has been banned in Pakistan.

Many see Malala as a tool of Western belief through which they exert their ideological influence and defame Pakistan. Criticizers also question her Nobel Award-winning when people like Abdul Sattar Edhi have been ignored, and women like Aafia Siddique have been blacked out from history.  Furthermore, people believe that Malala’s stance has done nothing to help Pakistani girls and hasn’t assisted at all in preventing unprovoked attacks on children still happening all over Pakistan. Apart from the basics, so many unidentified girls are still deprived of education in Pakistan. So many more are denied fundamental human rights, but if someone braves the question of why Malala and why so much, there is no answer. While it’s true that Malala faced terror no one ever should, the world should also pay attention and commend all the other oppressed women whose names are forgotten.

U know we as nations are typically islamic but don’t follow soul of islam ,we do the things which are easy to us in Islam ,if we are so islamic y not weed out corruption ,provide justice ,gave ppl economic stability, simply do the things which interests us in this world but all these things required sacrifice for which we are not ready…Islam became top religion why?? Because it made the Bedouin of u known deserts superpower of world ,why our version of Islam is not making us powerful? because it’s flawed… coming to malala she might be wrong in her statement about marriage but what fate had done to her ,we didn’t even count it …she is victim of extremism and should not be treated in this way..about her I don’t too deep

Jayzoq is a student-run media outlet that strives to bring to people, free and ethical journalism by analysing the world's greatest issues and providing pinpoint opinion articles. All our members are from the youth community, and most of them are still students, which serves to show that the youth has an important role in shaping the future world.
Contact us: info@jayzoq.com
© 2023 Jayzoq Media. All Rights Reserved.
wpDiscuz
1
0
Would love your thoughts, please comment.x
()
x
| Reply
MORE STORIES