Jayzoq
Home The Social Compass Nepotism: A Menace to Society 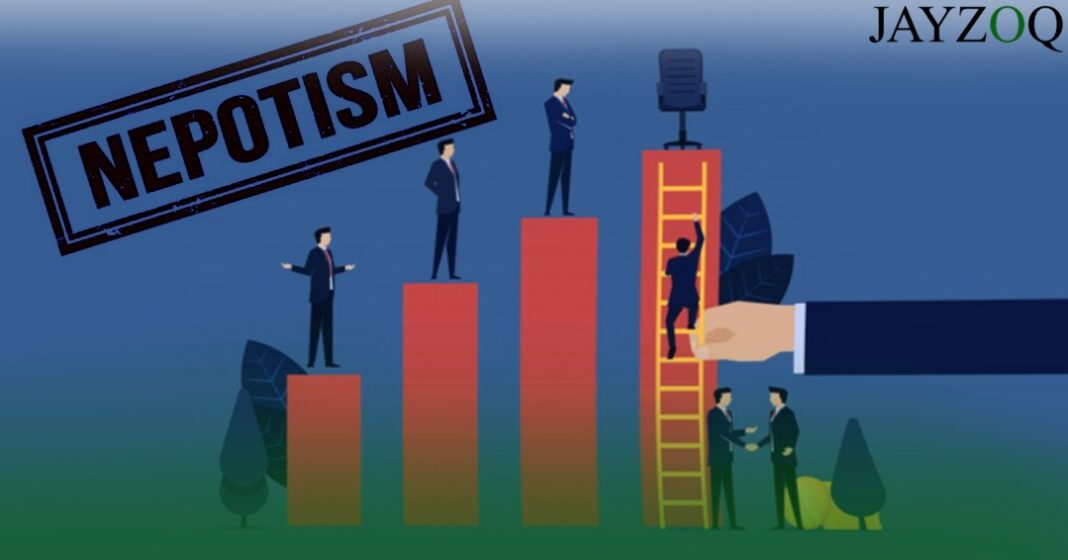 A nation plagued by nepotism, like Pakistan, is strikingly similar to a house built on sand; it can and will collapse into debris under pressure. Generally explained, the practice of favoring personal relatives or friends in the presence of other candidates who merit a certain position is known as nepotism. Since independence, Pakistan has been afflicted with rampant nepotism in every field of life. From the political arena to national sports teams, induction of people related or linked to the authority figures in the respective field is quite common. Nepotism, wherever in the world it exists, if allowed to go on without some kind of regulation, will undoubtedly reign supreme.

In order to comprehend the importance of eradicating nepotism, it is crucial to consider the distressing effects it has on a developing nation. The impacts can be split up into repercussions faced by individuals and by organizations. Further, it is also imperative to shed light on how nepotism affects social and economic growth of a country as a whole.

First and foremost, the impacts of nepotism on individual mental health and morale can be severe. This is because when a candidate gets overlooked for a certain position or promotion which they feel that they deserved, an innate sense of incapability or inferiority starts to grow in them which hinders them from putting their best work forward and moving up the social ladder. Moreover, they are also victimised by their low self-esteem which will restrict them from performing at their full potential. In addition, when a person repeatedly attempts to succeed, yet fails due to the ill in society that is nepotism, they can become delusional. This delusion can often accompany depression. On the other hand, individuals that reach authoritative positions through nepotism take them for granted and they may harbor an inflated perception of self-worth.

Secondly, the effects of nepotism on a company’s reputation and capability can be rather annihilatory. The cutback in a company’s productivity will be manifold since the senior administrators will consider their jobs guaranteed, whereas the majority of the employees will not exert themselves since they are aware that it won’t pay off. This will result in an overall decrease in the company’s efficiency, output and repute. Some employees may even quit their jobs which will result in a loss of dutiful and competent personnel. Another important aspect to reflect upon is that employees can file lawsuits against companies practising nepotism, which if proven, can lead to hefty settlements. A crucial consequence to consider is bad publicity which can dissuade customers from dealing with a certain organization. Companies infested with this vice are bound to fail, in one way or another.

The Disparity in Effort Among Victims and Perpetrators of Nepotism

Lastly, and most importantly, the socio-economic effects of nepotism can prove catastrophic. When nepotism thrives openly in a country, international investors are hesitant in making sizable contributions which hinders a country’s growth. Another unwelcome upshot is that nepotism fuels wealth inequality. When high-paying positions are limited to the family which owns it, it increases accumulation of wealth in a few hands which increases poverty levels and the difference between the haves and the have-nots. Furthermore, because of the excessive prevalence of nepotism in developing countries, students favor jobs abroad rather than on home soil. Thus, nepotism directly contributes to the pervasive and profound talent drain in these countries. Ergo, it leads to an inexorable loss of tax revenue, sizable investment and skilled workers.

If you ever encounter nepotism in the workplace, the first step is to continue working professionally as you did before and avoid making rash decisions in the spur of the moment. Next, you need to document your meritable work in order to build your case. After that, the course of action would be to contact a superior whom you can trust or to reach out to other coworkers who might be facing this problem as well in order to initiate a cohesive grassroots movement to eradicate nepotism. Social media platforms such as Twitter could also prove invaluable in these instances. Ultimately, it is imperative to grasp that your worth cannot be defined by your position and that you are more than what people view you as.