Jayzoq
Home The Social Compass Social Anxiety: Escalation of a Disease that Drives you to Question Everything 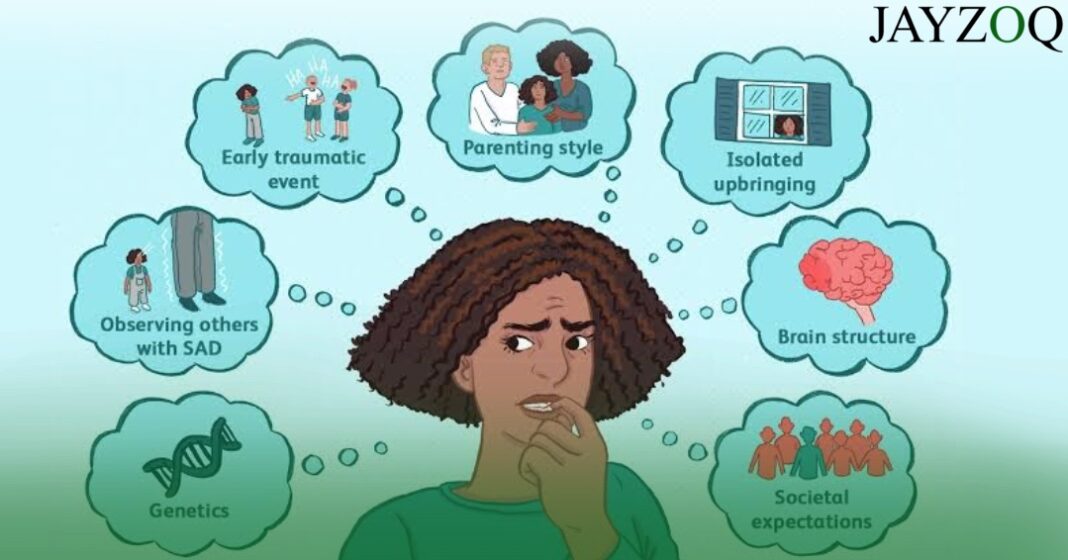 Blood pounds in my ears. My palms feel clammy as I ball them into fists. I blush profusely as I struggle to comprehend what the teacher is asking. As I stand in front of the class, everyone stares at me. While they exchange confused glances, cheeky grins and subdued laughter, my eyes well up with tears, and the teacher leads me out.

Such an experience is not a singular episode, in fact, it is shared by many across the globe. This condition is professionally known as social anxiety disorder.

Broadly defined, social anxiety disorder is the profound and crippling feeling of apprehension and nervousness surrounding social interactions. It stems from a fear of being judged, negatively looked upon or ostracized in social circles. Social anxiety’s root causes are genetics or traumatic experiences with bullying, teasing or public humiliation. It can hinder a person from reaching their full potential as it results in a rise to low self-esteem, depression, the inability to work well in public spaces and makes them vulnerable to criticism. This disorder can even prevent its victims from interacting socially and thus, the significance of limiting its spread is paramount.

First and foremost, social anxiety disorder is aggravated in those already affected by it due to lockdown and quarantine orders in most countries in light of COVID-19. Having gotten an unexpected and prolonged break from all social interaction for at least a month before being expected to return to some semblance of normalcy from their homes has acted as a disruption. Regularly, these people struggled with their social anxiety in work environments and social circles. However, in isolation, all the progress they were making came to a standstill. As they settled into their lives during quarantine, this prolonged break from all sorts of social interaction sucked them into a downward spiral of introversion. Since they had more time for contemplation in isolation, their anxiety fed on itself, and the prospect of returning to social interaction seemed more and more burdensome with each passing day.

Another factor that contributes to the exacerbation of this social phobia is the repetitive stress of being productive. Online courses have been made free, students are being encouraged to engage with course work, influencers urge people to work out and practice new motives. This incessant stress on being productive adds up to a mental image of everybody else other than you spending your time wisely and improving on yourself. Thus, people are forced to demotivate and demean themselves for not being productive while their fear of facing their coworkers and colleagues is compounded considerably.

Furthermore, quarantine has also resulted in an upsurge of new social anxiety disorder cases because of the fact many people struggle to make ends meet during the pandemic due to layoffs occurring worldwide. The impact of such policies leads people to believe that they are losing their status and standing in the society, which ultimately leads them to fear returning to their social circles after the pandemic ends. Students are also at the forefront among new victims of social anxiety disorders. With studies in universities halting at the start of the pandemic and universities demanding hostel and tuition pay regardless, students, more than anyone else, feel powerless and helpless. This can lead to low self-esteem and low confidence, boosting rise cases of social anxiety disorder.

To limit a problem that is so deeply entrenched in our society, simply texting friends and asking them how they are doing doesn’t and won’t suffice. If you are affected by social anxiety, you need to acknowledge your anxiety and then embrace it. Being anxious or scared isn’t an unsolvable problem; on the contrary, it can be overcome through gradual interaction with society. Opening up to someone you trust can prove to be fruitful. This sort of therapy can be very effective because your trust is whole-heartedly invested in the person, enough for you to value their advice. However, if you feel you need professional help, many organizations across the world and Pakistan operate to provide you with the necessary care, with group therapy or personal assistance through chat. Sukoon (https://www.sukoon.ai/) is one such example in Pakistan.

Additionally, in times like these, having a schedule and routine can prove invaluable. To counter your social anxiety, you should list down things that make you uncomfortable on a minor level leading up to situations you find intolerable. Then, one by one, you can analyze why you find these situations uncomfortable and deduce ways to make these situations bearable for yourself. An all-important point to grasp here is that however small a step one takes, as long as they keep trying, it accounts for something and that matters.