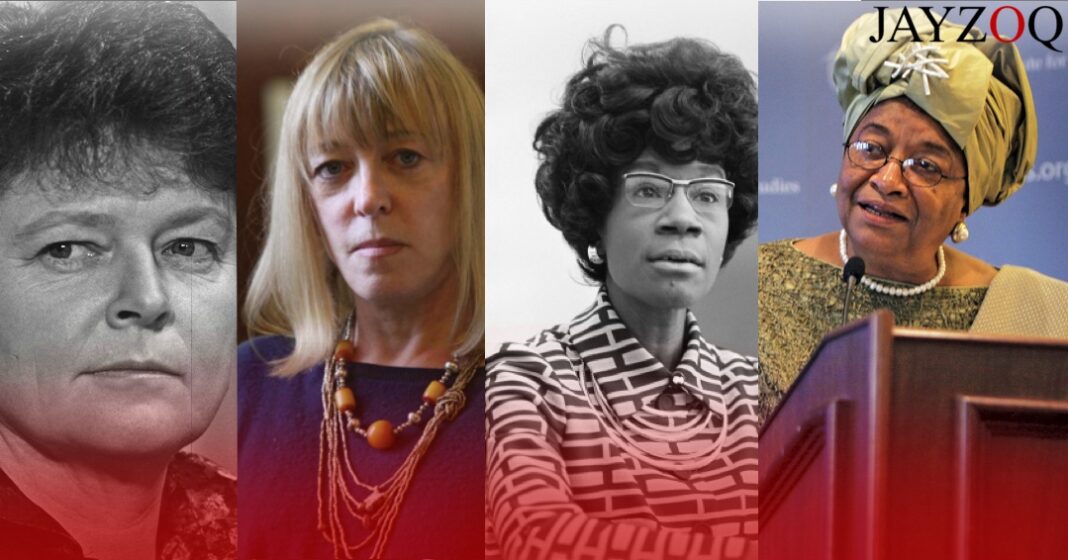 Today, we see women touching milestones previously thought impossible. Today, we see women demanding their rights and refusing submission. Today, we see women allying, no matter which field, towards success. Today we see women raising their voice for the voiceless when a decade ago, they themselves were the voiceless. Today, we see a revolution; today, we witness the result of the struggles of various women who fought so that women today could march and reclaim all that was stolen from them. Today, all of this is a result of women who struggled and gained themselves a seat at the head of the table, who molded the constitution to make place for all, who made their countries greater, who fought for peace. Here’s a brief look into the lives of some women who revolutionized the international landscape.

“The burden of disease falls on the poor.”

Gro Harlem Brundtland, first woman Prime Minister of Norway and former Director-General of the World Health Organization, is a prime example of such women. She served for three terms (1981, 1986–89, and 1990–96). When the Labour prime minister resigned in 1981, Brundtland was appointed to the post, the youngest person and first woman to become prime minister of Norway.

In 1983 Brundtland became chair of the UN World Commission on Environment and Development, which in 1987 issued Our Common Future, the report that introduced the idea of “sustainable development” and led to the first Earth Summit. In 1998 she became director general of the WHO, where she addressed global epidemics such as AIDS and SARS. Together with Han Seung-Soo, former minister of foreign affairs of South Korea, and Ricardo Lagos Escobar, a former president of Chile, she was appointed a special envoy on climate change to Ban Ki-Moon, the secretary-general of the United Nations. She held the post until 2010.

Burtland’s work in bringing about awareness towards climate change did not only unite several countries under the same cause, but also brought about peace and harmony for the movement, setting a milestone.

“I believe in both my right and responsibility to work to create a world that doesn’t glorify violence and war but where we seek different solutions to our common problems.”

Professor Jody Williams is a name to remember; a name to chant. She served as the founding coordinator of the International Campaign to Ban Landmines (ICBL) until February 1998. Beginning in early 1992, with two non-governmental organizations and a staff of one, Williams oversaw ICBL’s growth to over 1,300 organizations in 95 countries working to remove antipersonnel landmines. In an unprecedented cooperative effort with governments, UN bodies and the International Committee of the Red Cross, she served as chief strategist and spokesperson for the ICBL during a diplomatic conference held in Oslo in September 1997. During this conference, the ICBL achieved its goal of an international treaty banning anti personnel landmines. Three weeks later, she and the ICBL were awarded the Nobel Peace Prize.

At that time, Williams became the tenth woman – and third American woman – to receive this honor. Since February 1998, she has served as a Campaign Ambassador for the ICBL, speaking on its behalf all over the world. Not only this, in 2007 she was appointed as a leader for a United Nations High-Level Mission to investigate human rights abuses in the war-torn Sudanese region of Darfur. Professor Judy Williams single handedly brought the international community together to realise the dangers of landmines. She worked tirelessly in several countries, calling no place home, for peace and prosperity and the protection of human lives.

Shirley Chisholm was the first African-American woman to be elected to the US congress. In 1968 Chisholm was elected to the U.S. House of Representatives, defeating the civil rights leader James Farmer. In Congress she became known as a strong liberal who vehemently opposed weapons development and the war in Vietnam and favoured full-employment proposals. As a candidate for the Democratic nomination for U.S. president in 1972, she won 152 delegates before withdrawing from the competition. Chisholm did not only bring about a revolution for the African-Americans residing in the US, she united all black people in the entire world under the banner of power, freedom and liberty.

“Ethnicity should enrich us; it should make us a unique people in our diversity and not be used to divide us.”

Elen Johnson-Sirleaf was the first woman to be elected head of state of an African country. In the 1985 national election she campaigned for a seat in the Senate and openly criticized the military government, which led to a 10-year prison sentence. She was released after a short time and allowed to leave the country. This led to 12 years of exile in Kenya and the United States, during which time Liberia collapsed into civil war. Johnson Sirleaf became an influential economist for the World Bank, Citibank, and other international financial institutions.

From 1992 to 1997 she was the director of the Regional Bureau for Africa of the United Nations Development Programme. During her presidency, with more than 15,000 United Nations peacekeepers in the country and unemployment running at 80 percent, Johnson Sirleaf faced serious challenges. She immediately sought debt amelioration and aid from the international community. By late 2010 Liberia’s entire debt had been erased, and Johnson Sirleaf had secured millions of dollars of foreign investment in the country. She was one of three recipients, along with Leymah Gbowee and Tawakkul Karmān, of the 2011 Nobel Prize for Peace for their efforts to further women’s rights. She did not only improve Liberia’s international image through prevailing democracy, she also worked for the cause of women rights and peace.

There are so many more women who went down in history for bringing about a revolution in the name of peace. Women have been fighting for centuries for their inherent rights. These women proved that their involvement in politics is essential for world peace. Even today, rights and freedom are a far cry for women, but there’s comfort in knowing they’re working towards it and one day they will succeed.