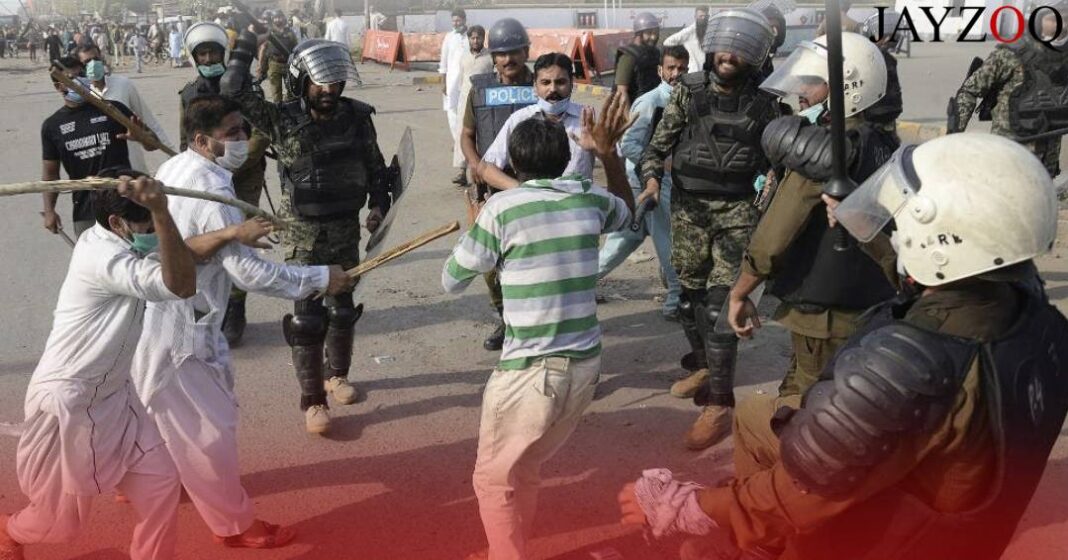 In April 2021, Saad Rizvi, the son of late Khaadim Rizvi was arrested by the police and nationwide the season of protest and sit-in entered which resulted into a civil war between the police and TLP. Police, whose mission was to protect the writ of state from TLP spreading violence in the name of religion, were unsuccessful, resulting in hostages, deaths and countless injuries. Four policemen sacrificed their lives in the line of duty while around 1,000 were injured. Several police vehicles were torched, buildings were attacked, and a number of police personnel were kidnapped and tortured brutally. On April 18, 2021 Nawan Kot Police station was attacked by TLP personnel who were armed with petrol bombs and had stolen a tanker truck carrying 50k liters of petrol. The whole incident led to the injury and kidnapping of police and rangers.

The police retaliated and launched a security operation against the group in response to the attack. According to Lahore Police spokesperson Arif Rana “A senior police officer and two paramilitary officers were among the six being held by supporters of (TLP)”

However, on Monday, the protestors retreated, and the police also moved back. The religious parties caused a strike the similar day in solidarity and TLP was designated as a terrorist party under the anti-terrorism legislation by the government. According to Imran Khan’s tweets, some religious parties uses Islam wrongly. Protesting like this he argued won’t make a difference to the West. It doesn’t hurt them but us. The Government only acted against TLP under anti-terrorism law when they challenged the writ of state, used street violence, and attacked police and law enforcers. Hussain Haqqani, former Pakistani ambassador for South and Central Asia stated that ban has more to do with the optics for country eager to get off the grey list

The entire disruption was started back in November 2020 against France that ignited and encouraged Islamophobia instead of putting it down. On November 7, 2020 TLP rally against France was organized at Sharea Faisal Karachi. Rally demanded cutting of diplomatic ties with Paris, boycott French products. The rally asked the Government to take practical steps, else it would be compelled to take extreme actions. The rally was led by Khaadim Rizvi, who declared Jihad against France.

On November 12, 2020 talks ahead of the march began. Nov 15, 2020 TLP announced Tahafuz Namoos i Risaalat March from Liaquat Bagh Pindi to Islamabad, despite the teams of administration trying to convince the TLP otherwise. November 14, 2020 the security was tightened, and arrests were made. Police and law enforcers detained 181 leaders and activists of TLP in different parts of Pindi and sent 65 of them to Adiala Jail. On November 16, 2020 the Imran Khan Government accepted all demands and released a copy of handwritten agreement with the signature of Ministry of Religious Affairs Mr. Pir Noor ul Qadri and Islamabad Deputy Commissioner Mr. Hamza Shafqaat reached an agreement with TLP to decide on the matters by February 16, 2021. However, later on the Government demanded for more time on which TLP agreed and a new date of April 20, 2021 was issued.

TLP demanded for the expulsion of the French Ambassador, release of Saad Rizvi, removal of ban on party, release of party workers, FIRS to be dropped against them. On January 3, 2021 Saad Rizvi took the throne as a new leader after his father’s demise. The rise of a new leader gave birth to new warnings and alarming situations. In April, 2021 Saad Rizvi issued a video message, mobilizing workers to prepare for the protest march if the Government failed to meet  the deadline. The video message prompted his arrest on April 12, 2021. In response to the arrest, TLP called a country wide protest leading to sit-ins in major cities, blocking of highways, motorways, train tracks and violent clashes with police.

The issue arose due to Charlie Hebdo’s decision to republish cartoons featuring Prophet pbuh prompted due to the terrorist attack in 2015 in its Paris Office by two Muslim brothers belonging to extremist Al Qaeda group. The republishing was backed by Macron. The backing by Macron was opposed by Khaadim Rizvi and declared it as blasphemy.

Blasphemy has been a sensitive subject in Pakistan that has killed 78 people in mob and target attacks in relation to it since 1990. Khaadim Rizvi himself has been advocating for killing of all those deemed to have committed blasphemy against Islam and served as a funding stones for birth of Tahreek e Labaik in 2016 by Rizvi along with Khurshiid Naeem who weaponized Barelvi sects in the name of Blasphemy. TLP was formed after the execution of Mumtaz Qadri, the assassin of Governor Salman Taseer.

TLP since its foundation has ignited violence and promoted extremism in the name of Islam through actions that contradicts the teaching of Islam. The widely followed tradition of declaring death penalty on the basis of unproven blasphemous actions, according to the renowned Islamic scholar Javed Ahmed Ghamidi is a weak tradition as according to him the guidance of Prophet pbuh ought to be explained in Prophet’s word which are solely based on teaching of Quran not by the events.

In the Quran Allah has clearly commanded that “Who killed one kills the entire humanity” in Surah Maidah. Furthermore, in the conditions in which killing is justified is clearly mentioned in Quran and Islamic i.e. Rapists as mentioned in Surah Noor and people who cause disruption as mentioned in Surah Al Maidah. Ghamidi further affirmed and explained the rulings on events i.e. who reported the incident, what was the incident, and most importantly the prophet’s decision on matter and while studying the events the analysis must be done according to the commandments and ruling of Quran. Therefore, no law can be extracted out of mere an event.

Moreover, in the case of insults and Blasphemies there are certain steps that need to be taken according to Ghamidi. If a Muslims utters derogatory remarks regarding Prophet and Islam, one must follow the path to persuade and educate him or her. In the case of non-Muslim of the state as well as non-Muslim of non-Muslim state, it is the right of every human to criticize but if criticism takes shape of insult that is not acceptable. In such a case, the path of Dawah is to be followed and Muslims must be duty bound to present teachings of Islam and to promote non-violence. Because there is a high chance that non-Muslims might have misunderstood the teachings of Quran and Sunnah and Muslims reaction must be of negotiation and non-violence.

In the light of Ghamidi’s interpretation, Muslims wrongdoings and the sufferings of innocents, it is clear that the actions of TLP promotes extreme national violence  and internationally these actions gives a justification for then non-Muslims for their Islamophobic actions. With the police, no doubt the institution has its loopholes but it has been scapegoated while they protect the writ of state.